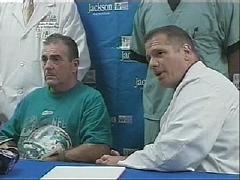 MIAMI, Fla. — Spinal cord injuries are very difficult to treat and many times, the damage is permanent. However, a new device helps the spine heal by cooling it down.

When police Officer Manuel Gomez fell from his police horse, he could not feel a thing below the neck.

“It’s incredible. I thought I was never going to walk again,” he said.

Gomez’s spinal cord was crushed, and Dr. Steve Vanni, of Jackson Memorial Hospital, said the paralysis could have been permanent.

“A complete injury at that level, he’d have no arm function, no leg function,” he said.

Just weeks later, Gomez is back on his feet, thanks to a new device called Coolgard 3000.

Like other parts of the body, when the spinal cord is injured, it becomes inflammed and swells. That may actually cause more damage. The Coolgard allows doctors to stop the swelling.

During the procedure, a Catheter is inserted through an artery in the groin. When blood passes over the catheter, it is cooled, dropping the body’s temperature from a normal 98.6 degrees to approximately 91 degrees.

That chill drops swelling in the spinal cord and minimizes the damage.

Gomez faces months of rehab, but he hopes one day, he will be back on the beat.

The Coolgard 3000 is also used in to treat comatose patients who have suffered sudden cardiac arrest.