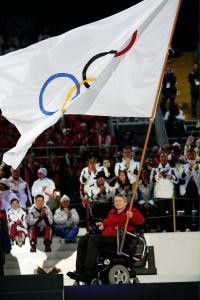 TURIN, Italy — The Olympic flag has been passed to Vancouver for the 2010 Winter Games.

Sullivan, a quadriplegic since a skiing accident at the age of 19, needed a special holster on his motorized wheelchair to wave the flag. Rogge inserted the flag’s pole into the holster, then Sullivan rolled his chair on the stage to wave the flag eight times, bring a standing ovation from the crowd.

The Vancouver portion of the closing ceremony offered an invitation to the world to “come and play” in 2010.

There was a snowmobile carrying an ice fisherman on a sheet of ice. International opera star Ben Heppner, who was born in Dawson Creek, B.C., boomed out a version of O Canada a cappella. Rocker Avril Lavigne of Napanee, Ont., dressed in a black coat, matching high boots and flowing blonde hair, belted our her song Who Knows.

There was a video montage highlighting mountains, rivers and whales. The chiefs of the four First Nations, on whose land some of the Games events will be held, offered an invitation for the world to come to B.C. 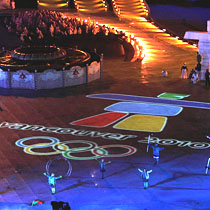 Accepting the six-metre Olympic flag represented a special challenge for Sullivan, the first quadriplegic mayor to accept the flag, since he has lost the use of muscles in his fingers.

Rogge inserted the flag into the wheelchair’s holster. Sullivan then moved his wheelchair back and forth, turning slightly each time, so that the flag fluttered.

Sullivan served as a city councillor for almost 12 years before he was elected mayor last November. He has received the Order of Canada for his community work on behalf of people with significant disabilities.

The Turin Organizing Committee built an elevator on the stage for Sullivan, who said he has spent many hours — sometimes in the middle of the night — practising his routine in Vancouver parking lots.

The closing ceremony wrapped up Canada’s most successful Winter Games ever, with the country winning 24 medals.

The ceremony was held on a cool, clear night at the 32,000-seat Stadio Olimpico, the future team of the soccer team AC Turin.