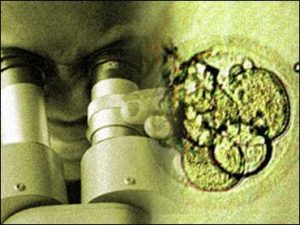 (CBS) If paralyzed people are ever going to walk again, it might be because of the scientist in this story. His name is Dr. Hans Keirstead and he has made great strides using human embryonic stem cells. He is among the best and the brightest in his field — a field that shows enormous promise, but has been restricted by a ban on federal funding for research because it involves the destruction of human embryos.

To move the science forward, California allocated its own money to pay for stem cell research, luring some of the top scientists in the nation, who are doing cutting edge work that could change the way we treat disease. No image says more about the remarkable results that have been achieved so far than this one: laboratory rats whose hind legs were completely paralyzed — until they were injected with human stem cells. Remarkably, afterwards, the rats were able to walk again.

Now, Dr. Keirstead, a 38-year-old biologist at the University of California, Irvine, says he is ready to try the same thing in people paralyzed by spinal cord injuries. Pending FDA approval, correspondent Ed Bradley reports that would make him the first scientist in the United States to transplant embryonic stem cells into humans.

“If it does the same thing in humans, I think we’ve hit something here that’s gonna be truly remarkable,” says Dr. Keirstead.

Keirstead has been quoted as saying that that every 100 years we have one major medical milestone and that this is one of those times. It’s a pretty bold statement.

“I have never seen in my career a biological tool as powerful as the stem cells. It addresses every single human disease,” says Keirstead.

That’s because embryonic stem cells, which are extracted from embryos just five days after fertilization, are capable of becoming any type of cell in the body, can be grown in infinite numbers, and can replace cells that have been destroyed or damaged by disease or injury.

Dr. Keirstead says that for humans, about 20 million cells have to be injected. “That’s the beauty of this cell type; you can make a lot of cells,” he explains.

Suzanne Short has been closely watching Keirstead’s work every step of the way. She was paralyzed from the neck down when a drunk driver crashed into her car 24 years ago. She meets regularly with Dr. Keirstead, and hopes to one day be treated with his stem cells.

Asked how she would react if she were told she was eligible for a clinical trial, Short says she’d jump at the chance. “I used to say I didn’t want to be first but I’d be second. I think at my age now I’d be willing to go first.”

What does she hope stem cells might eventually do for her?

“Whether I walk or not, I really don’t care. And, yeah, if I do that’s great,” says Short. “But, I mean, if you could just wake up one morning and not have to wait for someone to come in my room and get me out of bed, I could at least transfer myself into my own wheelchair, be amazing. I’d be completely independent.”

Short, a professional artist, is confident that it’s not a question of if that will happen but when. That’s because of what Keirstead has been able to accomplish with embryonic stem cells in just the past five years: he transformed them into a specific type of nervous system cell that is needed for the spinal cord to function properly.