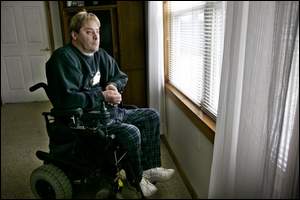 WILLIAMSPORT — Robin Larson had just turned 20 when he and his buddies decided to play water tag in a pond. He dived in, hit the bottom, broke a vertebra and injured his spinal cord.

For 23 years, Larson has been paralyzed from the chest down. He can move his arms and one index finger, but not his legs. He must use an electric wheelchair now, because years of using a manual model ruined his shoulder joints.

In early April, Larson plans to undergo experimental surgery at the Xishan Hospital’s Neurological Disorders and Research Center in Beijing, China. Nasal cells will be taken from his olfactory nerve and put in a culture to multiply. Then they will be transplanted above and below the injury, in hopes that new nerve connections will develop. “The results look promising, but nothing in life is guaranteed,” Larson says. “Any gain is better than no gain.”

The procedure uses olfactory ensheathing glia (or OEG) cells, which some researchers say foster continuous Regeneration in the olfactory nerve. The lead researcher is neurosurgeon Dr. Hongyun Huang, whose research has been covered by CBS, NBC, the BBC, Time magazine and the Los Angeles Times. Several hundred patients have had the operation, with mixed results.

Professor Richard L. Borgens, director of the Center for Paralysis Research at Purdue University, calls the procedure “highly controversial.” Medical experiments in China, he says, lack the safety controls, regulations and reporting standards found in the United States. “Those that go for experimental procedures in China are going to be flying a bit blind,” he says.

Olfactory cells are relatively easy to collect, and because they come from the patient himself, “you get past the issue of rejection,” Borgens says.

He says the procedure would be more valuable for replacement of nerve cells lost to brain injuries than replacement of the long nerve fibers destroyed in spinal cord injuries. “People that champion this like to say there is proof they form new connections. That is debatable,” Borgens says.

It’s still worth a shot, Larson says. He’d be delighted if the operation let him use his fingers again, and have better bladder and bowel control. Since the accident, he no longer sweats. He can feel pressure and touch, but he can’t feel heat, cold or pain in the affected limbs. “I’d give everything I own just to be able to walk,” he says.

Friends and family members are holding fund-raisers to raise $20,000 for the operation and Rehabilitation, plus an estimated $4,000 in travel expenses.

“I just want him to have a better way of life,” says a friend, Jeff Burris of Williamsport, who is planning a March 12 fund-raiser in Attica. “We went to school together since second grade, and we worked together. I’m a heart patient, so I know what I have to go through. I can’t work, but I can still walk. I’ve seen him this way for almost 24 years now.”

Church members in Williamsport and Judyville also are raising funds for Larson.

“I hope that someday he’ll be able to walk again. I hope he’ll be able to dress himself,” says Larson’s sister-in-law, Tanzy Sturgeon of West Lebanon. She has provided him with nursing care for 15 years.

Despite everything, Larson has an upbeat attitude. He can wash his hair, brush his teeth and partially bathe himself. He drives a van equipped with a wheelchair lift and special controls. For extra money, he sells toner cartridges used in computer printers. He hopes to someday marry his fiancee, Shelley Wilson, who was paralyzed in a car crash in 1994.

He learned about the Chinese operation nine months ago through a TV show. Only five Americans had had it. Most had regained at least some of their feeling, he says. “I talked to one, and he said it was the best surgery he had had,” Larson says. “This is my only chance in life to walk again. You don’t know what I go through.”

“He has nothing to lose,” Sturgeon says. “He’s reaching for the stars. We’ll see which one we get. There’s a bunch of ’em up there.”

Robin Larson looks out the front window Sunday of his Williamsport home. Larson has been paralyzed since breaking his neck diving into a pond 23 years ago. He is traveling to China at the end of March for surgery he is hoping will restore some function to his paralyzed limbs.
How to help
Donations to help defray the costs of Robin Larson’s surgery can be sent to the Robin Larson Benefit, Union Federal Savings & Loan, 120 N. Monroe St., Williamsport, Ind. 47993. A benefit concert, with eight bands, door prizes, raffles and food, will be held from noon to midnight on March 12 at Hinkle’s in downtown Attica.

For more information about the operation, visit these Web sites: www.nrrfr.com and www.cordtalk.org