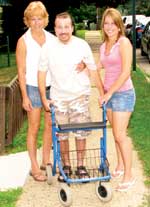 Like hundreds of other people, Frankie Gogol will be a spectator at the annual Little Great Race in Charleroi on Saturday, Sept. 10. But Gogol, of North Charleroi, will have more than just a passing interest in the runners and walkers in the event.

Gogol, 27, suffered a severe life-changing spinal cord injury last year when he fell from a tree stand while deer hunting with a neighbor, Gary DeUnger, at North Charleroi Recreation Park.

Proceeds from the Little Great Race will go to Gogol and his family to help with mounting medical expenses that have climbed well into six figures in the past nine months.

“When we heard about Frankie’s accident and his family’s plight, there was no question as to where the proceeds would be directed this year,” said Vic Vitale, chairman of Little Great Race Inc. “Frankie is a courageous young man, and he and his family epitomize the true meaning of commitment and love as they fight back from this accident.”

Had it not been for the quick initial action of DeUnger, 59, and ensuing treatment by Mon Valley Emergency Medical Services personnel, the Little Great Race aspect of Gogol’s story would not be possible, said Frankie’s mother, Sherrie Gogol.

“Gary found Frankie lying unconscious near the bottom of the tree stand and immediately dialed 911 from his cell phone and began administering CPR,” Sherrie Gogol said. “Paramedics from MVEMS arrived within minutes of Gary’s call, took life-saving measures to control the situation and made arrangements for medical helicopter transportation to Allegheny General Hospital in Pittsburgh. Had it not been for Gary and the paramedics, Frankie would not be with us now.”

DeUnger, who works for the U.S. Army Corps of Engineers, downplays any thoughts of his being a hero.

DeUnger said he and Gogol went hunting at the North Charleroi park in hopes of Frankie’s getting a deer.

“Frankie, his father and I had gone hunting in Greene County earlier in the week, and I had got my deer,” DeUnger recalled. “Frankie wanted to try his luck again, and I agreed to go up there (to the park) with him. We walked to the tree stand, which is about 13 feet from the ground, and I told him to wait until I returned before he tried to come down. I headed for the perimeter of the park, about 50 yards away, and tried to push that area for him in search of deer. I started back to the tree stand when I heard a noise, something like a tree falling.”

DeUnger was only “10 seconds away” when he saw Gogol lying on the ground.

“He wasn’t moving, and I knew something was wrong,” DeUnger said. “I raced to him and tried talking to him, but I got no response. I never carry my cell phone with me, but for some reason I had it in my pocket that day. I guess God was on our side this time. I dialed 911 and told them what had happened, that I thought Frankie had a back injury. I then performed CPR. When I heard the ambulance’s siren, I ran to the entrance of the park and waved to them to be sure they didn’t miss where we were.”

Sherrie Gogol and her husband, who live only a short distance from the park, also heard the siren and saw the ambulance racing toward the recreation site.

“I said, ‘Frankie’s up there,’ and I had a very bad feeling,” Sherrie Gogol said. “My husband got in the car and drove to the park. The paramedics already were treating Frankie and told us to drive to Allegheny General Hospital in Pittsburgh. They took Frankie to the Charleroi Area High School parking lot so LifeFlight could fly him to the city.”

At Allegheny General Hospital, Frankie remained in a coma and was diagnosed with a spinal cord fracture at C2 and extensive spinal cord contusions at C2 and C6.

“The initial prognosis from the doctors was that he would be a quadriplegic with no movement from the shoulders down and possibly be Ventilator-dependent for life,” his mother recalled. “On the third day, he started to awake from the coma. However, he started to develop pneumonia and ARDS (acute respiratory distress syndrome). The doctors decided to medically induce him back into a coma-like state with medication to allow his body and medicine to fight the respiratory complications. They indicated his prognosis to survive at this point was not very good because of the nature and severity of the injury and the onset of the respiratory complications.”

Frankie, a graduate of Charleroi Area High School, pulled through the respiratory complications and was awakened from the induced coma after several weeks. Movement was observed in one toe and one finger six weeks from the day of the injury. Three months after the accident, he was moved to a Rehabilitation hospital, then to an acute care facility to try to wean him from the ventilator, his mother said.

“The ventilator was successfully removed and he was moved to another rehabilitation hospital,” she said.

After five months, Frankie and his wife, Nicole, moved in with his parents in North Charleroi to receive necessary care and in-home Physical Therapy. The therapy comes primarily at the experienced hands of his mother and sister, Kelly Pendo, both of whom work for Orthopedic and Sports Physical Therapy Associates Inc., which is owned and operated by licensed physical therapists R. Alan Henson and James B. Henson and which is comprised of seven outpatient physical therapy sites in the area.

“Everyone in the family really helps,” Sherrie Gogol said, referring to Frankie’s wife, Nicole; her daughter Kristen Large; and her husband of 28 years, Frank, who works for Allegheny Power Co.; and her parents, Pete and Marie Cherocci, of Fallowfield Township, as well as other relatives. Frankie’s paternal grandparents are deceased.

Sherrie Gogol, Nicole Gogol and the rest of Frankie’s family expressed their gratitude to “so many people for their prayers and support.” Sherrie Gogol also is grateful to Little Great Race Inc. for its benevolence and said she and others in the Gogol family and friends will participate in the Sept. 10 event.

You don’t have to be a runner or walker to help extend the legacy of benevolence displayed by Little Great Race Inc.

Proceeds from this year’s event will go to Frankie Gogol, of North Charleroi, and anyone who wants to make a contribution can do so, said Vic Vitale, chairman of the event.

“All you need to do is indicate on your check that you want the money to go to Frankie,” Vitale said.

In addition to its monetary support of individuals or organizations, LGR Inc. also awards $1,000 scholarships to two Charleroi Area High School students who qualify for the Adam Boyd Memorial Scholarship. This year’s recipients are Kelsey Ramsdell and Chad Young, 2005 graduates of CAHS.