Able brothers fritter their time away 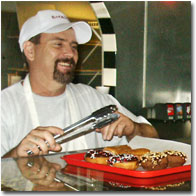 Kirk Pfeifle and his brother Eric Pfeifle are men who don’t give up, even though they are disabled.

They are men who get up in the wee hours of the morning to make the donuts they will serve customers of their new business venture, Wayne’s Donuts & Deli.

After a spinal injury, Kirk was told to just give up and go on Disability for the rest of his life.

Eric was injured in his work as an electrician.

When Kirk called and asked Eric if he thought he would be able to help out making donuts and sandwiches, Eric was quick to accept.

“Let’s try it because I’m not getting anywhere now,” Eric said.

And so Wayne’s Donuts was born.

The store opened July 11 at 438 S. Beeline Highway, behind Time Out Thrift Shop where longtime Payson residents will recall the Frozen Cow was located. Wayne’s is open for donuts, ice cream, sandwiches and soda Monday through Saturday from 6 a.m. to 6 p.m.

Donut entrepreneur was a not a career Kirk imagined for himself when he was hanging out at Jayne’s Donuts in Hemet, Calif. as a teen. Nor did it cross his mind during the two dozen years he worked as a heavy equipment operator.

“One day I had a freak accident,” Kirk said. “I fell out of a 641 Caterpillar Scraper, a machine as big as this building, for moving dirt. The tires are eight feet tall, three and a half feet wide and weigh approximately 3,000 pounds apiece.”

Falling like a rag doll, he remembers hitting his head one time before he blacked out.

Six years and several surgeries later he was told he would never be able to lift more than 20 pounds. “Nobody would hire me for even pushing a broom because they knew I was injured,” Kirk said.

Diagnosed with a spinal cord injury in his Cervical Vertebrae Kirk was retrained by the state of California’s occupational program as an office worker.

“When my fingers don’t work (each one is numb in varying degrees) and I can’t type, why are they sending me to school to learn something that I’ve never done in my entire life,” Kirk wondered. He admits he uses the bookkeeping skills now.

He aches if he sits for too long. Bright rooms are a source of eye strain that leads to headaches. But Kirk did not want to stay at home and collect disability. He wanted to find a career he could handle.

The owner of Jayne’s referred Kirk to his head donut baker, Jimbo, to learn the trade.

“I don’t know Jimbo’s last name and probably couldn’t pronounce it if I did,” Kirk smiles.

Jimbo was originally from Cambodia.

“I asked him if I could pay him for training,” Kirk said. “He told me no, ‘I will train you for free, but I ask that if I have a family member in your area we will trade me teaching you, for you teaching him.'”

To learn his new trade, Kirk came in at night for three months learning how to make the donuts, and which manufacturers had the best base mixes.

During the day, he learned how to make glazes from Jimbo’s friend and co-worker, Andy.

He learned that diluting a glaze syrup with vegetable oil might make the donut appear shinier and last longer, but not taste better.

Kirk said, “They taught me to take powdered sugar and water and vanilla or whatever flavoring we are going to use … The donut will actually last longer on the shelf on a hot day because the other stuff will run and get gooey.”

Kirk follows what Jimbo learned by trial and error. “I don’t want to divulge any trade secrets I learned from the Cambodians.”

Adapting those secret recipes to Payson’s climate has been tricky.

“The altitude makes a difference with the yeast and the timing of the glazes.

“It took me a week-and-a-half to really get a good donut, where it tasted like the glazed donuts I’m used to eating,” Kirk said.

Donuts that rise too fast get a lot of air bubbles in them, then when you cook your dough it fries deformed.

“I like a certain taste, so I practiced with yeast, because the yeast gives donuts a flavor,” Kirk said.

The first tasty treats they make in the morning at Wayne’s Donuts, named for the brothers’ grandfather, are cake donuts. A succession of glazed, chocolate, cinnamon rolls and their specialty, apple fritters, soon follow, but neither brother has the stamina they did before their injuries.

“We come in early (as early as 1 a.m.) because it gives us time,” Kirk said. “If we get tired we can sit down and wait until we feel good. All we have to do is be able to pick up 15 pounds of dough, throw it into the machine, and it will roll it out for us.

“The apple fritters we have to do by hand. That’s what takes us the longest.”

Kirk doesn’t mind standing outside on the sidewalk with a sign advertising his business. The heat feels good to his bones.

“I feel like I’m doing something with my life again,” he said.