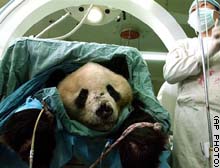 BEIJING (Reuters) – A giant panda has gone under the knife in a ground-breaking two-and-a-half hour operation to fix a broken back, Chinese state media said Friday.

The 20-year-old panda was found partly paralyzed, most likely the loser in a breeding season battle with another male, at a nature reserve in central Shaanxi province, the China Daily said.

Veterinary surgeons at Xijing Hospital in the provincial capital Xi’an Thursday fixed a broken vertebra, stabilized the spinal cord and removed some sections of bone to reduce pressure on Spinal nerves.

It was the first time such an operation had been carried out on a panda, the newspaper said.

“It is difficult to say if it will be able to stand properly after the operation, but we have certainly stabilized the injury and prolonged the animal’s life,” Li Mingquan, the surgeon who led the procedure, was quoted as saying.

China’s giant pandas are rebounding from the brink of extinction thanks to efforts to protect their natural habitat, but they still number only about 1,750, according to Chinese estimates.