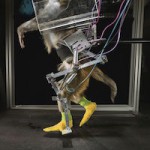 New technologies offer a window into how the brain creates movement.

“Some of our patients say they feel they are walking on sand,” says Nicolelis, describing pilot research in which eight paralyzed patients walked using a robotic exoskeleton that moved in response to readings of the patients’ brain waves. “We are actually fooling the brain of patients to think it is not a machine carrying them, but they feel they are themselves walking forward.”

Insights into the brains of paralyzed patients are helping to drive the technology as well as leading to new discoveries, says neuroscientist Eberhard Fetz of the University of Washington in Seattle. Roughly 130,000 people yearly suffer spinal cord injuries worldwide, and for more than a decade, researchers have sought to help these patients using robotic interfaces with the brain. After years of advances, efforts such as the exoskeleton are moving into the earliest stages of medical testing in patient volunteers.

“For patients, they are probably not coming fast fast enough,” Fetz says. “But brain-machine interfaces are giving us results producing a basic understanding of neural mechanisms. That is going to happen in parallel with developing these as tools to benefit patients.”

At the meeting, Nicolelis also presented research on two rhesus monkeys that had electrodes implanted deep in their brains that, with training, allowed the animals to steer a wheelchair using thought alone. The goal of that research is partly to help develop a “brain pacemaker” implant that would pick up clearer signals from thoughts to help control future robotic prosthetics.

Signals from deep in the brain are much easier for devices to read than ones picked up by electrical skin sensors on patient’s skulls. Such implants made the monkeys relatively quick students at wheelchair driving. “They can reliably steer the wheelchair to get a grape,” Nicolelis said. “They like grapes.”

Fetz and colleagues have similarly shown that brain interfaces in monkeys can “bridge” the damaged area in a spinal cord injury, allowing voluntary movement of muscles. “These efforts are in fact coming along and offer a lot of promise,” he says.

Training paralysis patients to walk with an experimental exoskeleton can have unexpected benefits too. The people in Nicolelis’ study showed improved muscle tone, heart health, and digestion over the last year, he says.

Most surprising has been the finding that the faster patients walk with the exoskeleton device—a skeletal frame equipped with 15 electrical motors triggered by electroencephalogram readings—the more natural the walking feels to them.

Paralysis also cuts off sensation from the lower limbs, which can make standing upright feel alarming, as if one is simply hanging in air, Nicolelis says. However, the brain’s ability to manufacture “phantom” feeling, best known from amputees who report pain from phantom limbs they no longer possess, similarly kicks in for paralysis patients learning to walk in an exoskeleton.

Despite the excitement over brain-machine interfaces in recent years, a great deal of hard work remains ahead for researchers and patients, cautions neuroscientist Daofen Chen of the National Institute of Neurological Disorders and Stroke, part of the federal National Institutes of Health.

“In my personal view, brain-machine interfaces are offering important tools to understand the brain,” Chen says. “We are far from understanding the brain well enough to expect them to serve as solutions.”

Fetz, however, suggests that enough progress is being made to feel good about developing robotics that might help patients, both in efforts such as the exoskeleton and other advances that might bridge spinal cord injuries to restore normal functions.

One less well-known use for brain interfaces could help the 70 percent of paralysis patients with respiratory problems draw breaths, Fetz says. Neuroscientist Philippa Warren of Case Western Reserve University in Cleveland also spoke at the neuroscience meeting on spinal drugs and physical rehabilitation treatments to improve breathing for paralyzed patients.

“One of the benefits of this whole area of research is that training patients on these devices helps them become part of the research team,” Fetz says. “We are working together.”