Beau Vernon became a quadriplegic at 23. He has since coached two country teams to flags 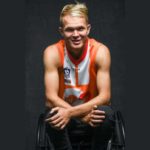 As Beau Vernon scooped up the football one Saturday afternoon at Leongatha seven years ago, he was collected in the head by a Wonthaggi opponent. It wasn’t a big hit, he said, just “wrong angle and wrong time”. He could have added “wrong bloke”, but did not.

“I fell to the ground and knew straight away something was very wrong,” he said.

He could not move his arms or legs. Nor could he feel his limbs when trainers touched them. “That time laying on the ground was the scariest of my life,” he said. Thinking he had broken his neck, he warned teammates, including his younger brother Zak, not to touch him. Less than two hours later, he was in an induced coma in the Alfred hospital. His parents, then on a once-in-a-lifetime trip to Africa, flew home in a miserable hurry.

Vernon hadn’t broken his neck, but he had dislocated two vertebrae. When he came to, he learned he was a quadriplegic.

“Me and my family thought that meant I wasn’t going to be able to move my arms at all,” he said.

“It’s not true. There are varying levels.” Vernon has no movement from the chest down, and none in his fingers, but his neck, shoulder and biceps all work, and so does his grin.

It flashes when he thinks back to his first reaction. He was a strapping figure, athletically accomplished and a willing trainer. His father, Daryl, had played a handful of games for Richmond and Sydney. “I honestly thought, I’m going to beat this,” he said.

“I didn’t understand the severity of my spinal cord injury, and what that meant long-term. ‘I’m going to walk one day’, ‘I’m going to play footy one day’.”

As a grimmer reality sunk in, his emotions did what his body could not: they went all over the place. He spent seven months at the Royal Talbot rehabilitation hospital in Kew. After being shown around the facilities on his first day, he found himself alone in his room.

Vernon was 23. Sport filled his life to overflowing. He had won state-level medals in athletics and played rep basketball. Six years previously, he had been the youngest player in Gippsland Power’s TAC Cup premiership team, playing alongside Scott Pendlebury, Dale Thomas and Xavier Ellis, all taken top five in that year’s draft.

Vernon was a natural, but injuries soured the next two years; the highlight was touching up Rory Sloane one day before his groin flared up again. Injuries continue to dog, but not daunt him as he tried out with Richmond and Collingwood and spent a season with the Casey Scorpions before going home to play for Phillip Island and then Leongatha, winning two best and fairests.

His was a blithe life, and then suddenly, it wasn’t.

The briefest of acquaintance tells you Vernon has an indomitable spirit to offset a broken body.

“I reckon there was a moment when subconsciously I decided, all right, I can’t change what’s happened, I can only control the future and my attitude towards it,” he said.

Late in 2014, he applied to coach Leongatha. “The club wasn’t really going the way I thought it should,” he said. After a two-hour presentation, the job was his.

He lost one grand final, and another, then in his third year won one, beating Maffra by a point. But he and his childhood sweetheart and now wife Lucy had a young family, and travel was becoming a chore, so last year he took up an offer to coach Phillip Island, his hometown club. Another flag ensued.

Now he is on a personal hat-trick.

As a wheelchair coach, Vernon cannot demonstrate what he wants of his players.

“I’ve just got to be better with my words,” he said. “But there are positives. I feel like I connect with people a bit easier because they know I’ve been through a tough time. Everyone has their challenges, but you can see mine.”

Sometimes, he can only laugh. Last year, a too-willing mate accidentally tipped him out of his wheelchair at Cowes, moments before the first siren. Another day, freezing as only Phillip Island can be, was too much for a first-gamer. “I can’t feel my legs,” he said. Rejoined Vernon: “Neither can I!”

The footy itch has gone. “I have moments, but I’m big on training my mind,” he said. “When I thought like that in the past, it got me into a negative mind fame. I don’t even go there now. There’s no point. I try to look at the things I can do.”

It’s a long list. Vernon surfs, boxes, hand-cycles and plays golf and wheelchair rugby. He kayaks, using specially made straps, and fishes from his kayak, using a rod attached to his forearm. He also plays darts, employing an underarm action to which he has found himself uniquely well adapted. He laughs to think of his brother’s look the day he beat him: “How can you lose at darts to someone that can’t move their fingers?”

Vernon does not pretend all is a bed of roses. A recent bout of ill-health flattened him. But he comes from a tight family, has a loving one of his own, and feels the whole football community has had his back from day one.

“I was very lucky to have so much support,” he said. “A lot of others, they feel like they’re on their own. I thought the only way to say thank you to everyone for the support is to make the most of my life.”

So it is that he works for disability company Interact Australia, and headspace. So it is that he will be at the MCG on Friday night for the launch of Team 22, the Robert Rose Foundation’s latest project. Its emphasis is on practical and psychological support for quadriplegics, and to foster active participatory lives for them, for instance, in the Victorian Wheelchair Football League.

Rose, who wore No. 22, played for Collingwood and the Bulldogs, and Sheffield Shield cricket, before a car accident left him a quadriplegic at 22.

By: Greg Baum
Chief Sports Columnist and Associate Editor with The Age