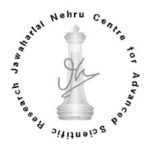 A small molecule synthesised by researchers at the Jawaharlal Nehru Centre for Advanced Scientific Research (JNCASR), in Bengaluru, may have the power to make patients paralysed by spinal cord injury walk again.

An international team of researchers who worked with the molecule demonstrated that it has the ability to reprogramme nerve cells damaged during a spinal cord injury in animals, recover sensory and motor functions.

The spinal cord is made up of bundles of nerve fibres. These are the long ‘tails’ (or axons) of nerve cells, which stretch up and down the spine. When the spinal cord is injured these fibres can be damaged, or in some cases severed completely, and so can no longer carry signals between the brain and body. After a spinal cord injury, axons have very limited capacity to regenerate. As a result, patients often have permanent deficits in sensory and motor functions.

The latest study, by the team which included the JNCASR scientists, reported in the journal Science Translational Medicine that a molecule codenamed TTK12 can help promote regeneration and sprouting of sensory and motor axons in rodents.

The work is significant for Indian science because this molecule was synthesised by the JNCASR researchers led by biochemist Tapas Kundu, who worked on it for around 15 years.

The team led by Kundu, who is currently the Director of the Lucknow-based Central Drug Research Institute, a constituent laboratory of the Council of Scientific and Industrial Research, had earlier illustrated the compound’s propensity to boost memory power in healthy people. In a work published last year Kundu’s team, jointly with Anne L Boutillier of the University of Strasbourg in France, also established its ability to reverse memory loss associated with Alzheimer’s disease.

“We have been able to establish that both rats and mice with damaged spinal cord were able to move with very high degree of normalcy when they were administered the molecule for five weeks,” Kundu told BusinessLine.

To deliver the molecule to the brain of the rodents, the scientists wrapped the molecule in a sugar-based carbon nanosphere, which can bypass the blood-brain barrier that fiercely guards the passage of materials into the brain.

“From what we have seen it’s almost as if the nerve cells are being ‘primed’ for regeneration and growth,” said Giovanni in a tweet.

The researchers identified a key molecule called CREB-Binding Protein (CBP) that may be effectively reprogramming the nerve cells, altering the expression of a number of genes in the cells and boosting their ability to regenerate. The scientists found that TTK21 too possesses the ability to reprogramme damaged nerve cells, activating CBP.

“The drug treatment that promoted regeneration and recovery in mice and rats after spinal cord injury offers an opportunity to be tested in patients. In principle, this kind of treatment is not very far from being tested in the clinic. Further studies are needed to show the drug is safe in humans, before it could be trialled,” said Giovanni.