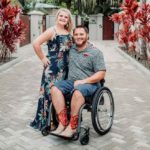 Kent Stephenson is on a treadmill, working to put one foot in front of the other as a team of trainers helps guide his legs. There’s a harness holding him upright, but Stephenson is, in a sense, walking again — 10 years after a motocross accident left him paralyzed.

“Going off the face of a jump, my motor locked up and I tried to jump away from the bike. It didn’t work for me, I landed and cartwheeled, somersaults and everything,” Stephenson says. “I pretty much knew instantly that I couldn’t move my legs.”

A few years after his injury, Stephenson came to Louisville from his home in Texas to be part of an experimental treatment for spinal cord injuries that has helped him regain some motion, even if scientists caution he will never make a full recovery.

The woman behind that research is Dr. Susan Harkema, rehabilitation research director at the Kentucky Spinal Cord Injury Research Center and director of research at the Frazier Rehab Institute.

In her office at the University of Louisville, Harkema says spinal cord injuries affect a lot more than a person’s voluntary movements.

“Somebody’s paralyzed and literally almost everything is taken away from them,” she says. “They don’t breathe as well, their heart doesn’t function as well, they can’t eat as well, they lose bowel, bladder, sexual function, they can’t regulate their temperature. Everything does not function like it did before.”

Harkema says her team of researchers is seeking “incremental victories over paralysis” — not a cure for spinal cord injuries. But even those small wins can mean major improvements for a patient’s quality of life.

To do that, Harkema’s lab is pioneering a new application for a medical device called an epidural stimulator. It’s a surgical implant that sends a continuous electrical current to the nervous system and is sometimes used to treat pain.

Harkema and her colleagues found that when they used the device to stimulate the lower portions of a patient’s spinal cord, it could help some people with spinal cord injuries regain voluntary motion in their lower bodies.

That discovery meant it might be possible to restore some motion and physiological functions once thought to be lost forever, without actually repairing the neurological gap created by the spinal cord injury itself.

“After a spinal cord injury, as devastating as that is, it’s only where the bone is broken that the neurons die. And that’s thousands of neurons, but there’s millions more below the injury that are still alive and healthy and under the right conditions can function,” Harkema says. “We’ve never targeted those for recovery, and that’s what we do here.”

For Stephenson, who is now 31, those incremental victories have meant major improvements in his outlook for recovery. After his session on the treadmill, Stephenson says he’s come a long way since his injury 10 years ago.

But the researchers hope approval from the Food and Drug Administration will allow medical device manufacturers, insurers and other parts of the healthcare industry to expand the reach of this new treatment.

Harkema’s work has received funding from the National Institutes of Health and many other groups, including the Christopher and Dana Reeve Foundation, the Craig H. Neilsen Foundation and the Helmsley Charitable Trust.

Beyond the funding, though, Harkema says what keeps her focused on spinal cord research is the patients themselves.

“This is an incredible group of people who you cannot even imagine how hard every minute of every day is, and their strength and courage and incredible motivation that they have just to get through the day, that in itself is inspiring,” she says, “and so it’s easy to be dedicated.”

Chris Bentley produced and edited this story for broadcast with Kathleen McKenna. Samantha Raphelson adapted it for the web.