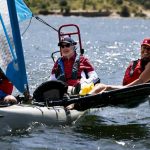 EAST CANYON RESERVOIR — Like any sailor, Derek Sundquist soaked in the sights, smells and sensations of sailing on a breezy, sunny summer morning.

But unlike most sailors, the 52-year-old’s exuberance had as much to do with the fact that he was in control as it did the joy of the sport.

“The simultaneous feelings of self-reliance and sheer delight … are priceless,” said Sundquist, a quadriplegic who is able to experience the exhilaration of sailing thanks to a University of Utah creation – the Tetra Watercraft. “The experience also emboldens my vision for what great things my future …holds.”

While so much of science and medicine focuses on understanding and possibly reversing or mitigating paralysis, Dr. Jeffrey Rosenbluth and his team are investigating ways to restore the kind of experiences that seem peripheral to life until one faces an existence without them. Rosenbluth, medical director at the University of Utah’s Rehabilitation Center, invented the Tetradapt device, which uses a joystick and mouth-controlled system to allow someone with a spinal cord injury or disease to steer, sail and manage electric propulsion.

In other words, someone like Sundquist, who needs help with just about every one of life’s monotonies from eating to showering to getting to various medical appointments, can slice across waves in complete command of a vessel.

“It’s so therapeutic,” said Sundquist, who has been Rosenbluth’s willing test subject for several years, as he was July 18 at East Canyon Reservoir. “I’m a fiercely self-reliant person, and for the first couple of years as a quadriplegic, by necessity, you’re always sucking the air out of the room.”

For just a moment, he is just another sailor, wind in his hair, sun on his face, far from the tragedy that stole his ability to move after a ski accident in 2013.

For three decades, outdoor adventures weren’t some weekend getaway for Sundquist. He worked at REI for 25 years, moving around the country to places that allowed him access to the world’s best mountain biking and ski trails. He was enjoying a day at a small resort in New Mexico when he somehow got turned around, crashed and woke up unable to move.

“I think I was in shock,” he said of whether or not he felt pain when he severed his spinal column. “Because I literally, and for good reason it turned out, couldn’t feel my arms or legs.”

“It was really more like snapshots of experiences, as opposed to a timeline,” he said. “I was in and out cognitively, and I was miserable from pain and confusion.”

He was flown to a hospital in Denver right after the accident, but his brother, co-chairman of the biochemistry department at the University of Utah, persuaded him and his then-wife that he should seek long-term treatment in Utah.

While his life had been a mixture of daily grind and blissful weekends or vacations, punctuated by frequent recreation, once he lost the use of most of his body, he could only see or plan to the next medical appointment or issue.

But he did what was required – one appointment, one procedure, one hour at a time. Not wanting to burden his wife with his new reality, they divorced in 2016.

“It was absolutely the right thing for her and me both,” he said. “She’s 20 years younger than I am, and she was suddenly burdened with not only the fact that our lives are clearly permanently altered, but she’s shouldering every piece of responsibility. But it was heartbreaking.”

While his marriage dissolved, he battled an infection. Shortly after that, he was invited to try the Tetra Watercraft, which he could operate blowing and sipping into a straw. Last winter, they asked him to try a Tetra Ski.

“As Dr. Rosenbluth was explaining it, I thought, ‘That’s fantastic, and I will certainly participate,’” Sundquist said. “But I really didn’t have any expectations … I doubted it was going to garner much excitement for me. I was thankful that I got my fix of adrenaline skiing while I was able-bodied.”

He helped test the ski device at Alta, and left the mountain in a rare state.

“I couldn’t sleep,” he said. “It was so exhilarating. To feel that you’re back in complete control of your environment, doing something that you love…”

When he prepared to leave that day, they mentioned another test they’d be doing.

“I”m free that day,” he said. “I was so excited. The feelings of self-reliance as a quadriplegic are very few and far between. You are so dependent on others for the vast majority of your needs. To be able to have an exhilarating, self-reliant experience is such a win on the feeling of independence side of the equation.”

The Tetra Watercraft and TetraSki will be used at several locations around the country, as researchers continue to refine and improve the technology.
Comment on this story

Sundquist has a long list of things and people for which he’s grateful, but very close to the top is Rosenbluth and his belief that these innovations are as critical to a quality life as more traditional medical advancements.

“Dr. Rosenbluth’s refusal to wait for future developments for spinal cord injured individuals and (focusing) instead on what he and his team can do right now to improve the lives of people in my condition is the driving force behind the Tetra Sailboat and Tetra Ski, and the numerous other ground-breaking accomplishments being made at the University of Utah.”