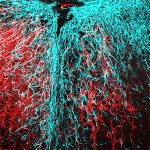 “We are the first to show that spinal cord injury results in an energy crisis that is intrinsically linked to the limited ability of damaged axons to regenerate,” said Zu-Hang Sheng, PhD, senior principal investigator at the NIH’s National Institute of Neurological Disorders and Stroke (NINDS) and a co-senior author of the study.

The cells of the body use adenosine triphosphate (ATP) for fuel. Much of this ATP is made by mitochondria. In spinal cord nerves, mitochondria can be found along the axons. When axons are injured, the nearby mitochondria are often damaged as well, impairing ATP production in injured nerves.

“Nerve repair requires a significant amount of energy,” said Sheng. “Our hypothesis is that damage to mitochondria following injury severely limits the available ATP, and this energy crisis is what prevents the regrowth and repair of injured axons.”

Adding to the problem is the fact that, in adult nerves, mitochondria are anchored in place within axons. This forces damaged mitochondria to remain in place while making it difficult to replace them, thus accelerating a local energy crisis in injured axons.

The Sheng lab previously created genetic mice that lack the protein (Syntaphilin) that tethers mitochondria in axons. In these knockout mice the mitochondria are free to move throughout axons.

“We proposed that enhancing transport would help remove damaged mitochondria from injured axons and replenish undamaged ones to rescue the energy crisis” said Sheng.

To test whether this has an impact on spinal cord nerve regeneration, the Sheng lab collaborated with Xiao-Ming Xu, MD, PhD, and colleagues from the Indiana University School of Medicine, who are experts in modeling multiple types of spinal cord injury.
“Spinal cord injury is devastating, affecting patients, their families, and our society,” said Xu. “Although tremendous progress has been made in our scientific community, no effective treatments are available. There is definitely an urgent need for the development of new strategies for patients with spinal cord injury.”

When the researchers looked in three injury models in the spinal cord and brain, they observed that Syntaphilin knockout mice had significantly more axon regrowth across the injury site compared to control animals. The newly grown axons also made appropriate connections beyond the injury site.

When the researchers looked at whether this regrowth led to functional recovery, they saw some promising improvement in fine motor tasks in mouse forelimbs and fingers. This suggested that increasing mitochondrial transport and thus the available energy to the injury site could be key to repairing damaged nerve fibers.

To test the energy crisis model further, mice were given creatine, which enhances the formation of ATP. Both control and knockout mice that were fed creatine showed increased axon regrowth following injury compared to mice fed saline instead. More robust nerve regrowth was seen in the knockout mice that got the creatine.

“We were very encouraged by these results,” said Sheng. “The regeneration that we see in our knockout mice is very significant, and these findings support our hypothesis that an energy deficiency is holding back the ability of both central and peripheral nervous systems to repair after injury.”

Sheng also points out that these findings, while promising, are limited by the need to genetically manipulate mice. Mice that lack Syntaphilin show long-term effects on regeneration, while creatine alone produces only modest regeneration. Future research is required to develop therapeutic compounds that are more effective in entering the nervous system and increasing energy production for possible treatment of traumatic brain and spinal cord injury.