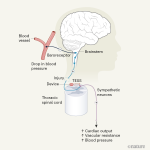 The inability to maintain blood pressure is a debilitating consequence of spinal cord injury. This problem has now been circumvented, by artificially recreating a reflex essential for blood-pressure stability.

Paralysis and sensory deficits are the most obvious consequences of spinal cord injury (SCI). But many people also experience orthostatic hypotension — an inability to maintain blood pressure when moving from lying to sitting or standing. In the short term, the condition can prevent normal filling of the heart with blood, and can cause light-headedness and dizziness. In the long term, recurrent episodes of orthostatic hypotension increase the incidence of heart attack and stroke, which are leading causes of death in people who have had an SCI. Writing in Nature, Squair et al. report a neuroprosthetic strategy that minimizes orthostatic hypotension caused by SCI. The device restores blood-pressure control in rodents, monkeys and humans.

Gravity causes blood to pool in the lower part of the body when we sit or stand. Orthostatic hypotension results mainly from the impairment of reflexes that prevent this pooling. The most crucial of these is the baroreflex, which is initiated by baroreceptors — neurons that sense arterial blood pressure and the degree of filling of the large veins and heart chambers. In mammals, these sensors are active when the body is at rest. A reduction in arterial blood pressure or blood volume reduces baroreceptor activity. This, in turn, activates the sympathetic branch of the autonomic nervous system, restoring blood pressure by increasing vascular resistance and the flow of blood back to the heart. SCI interrupts the connection between the lower brainstem, which receives the information from the baroreceptors, and the sympathetic neurons that innervate the cardiovascular system, which originate from thoracic and upper lumbar spinal segments (Fig. 1).

Orthostatic hypotension is typically managed by lifestyle changes (such as using compression bandages on the legs and sleeping in a semi-upright position) and drugs such as fludrocortisone (a blood-volume expander) or midodrine (which activates the receptors that normally mediate the effect of the sympathetic nerves on the heart and vascular muscles). However, these drugs can have untoward effects. Other approaches include electrical stimulation of skeletal muscles in the lower limbs, which activates the muscle pump and aids cardiac filling, and abdominal constriction belts. Both of these strategies have been used therapeutically, but their effectiveness has not been clearly demonstrated6.

Could neuroprosthetic devices be a better alternative? The principle is to restore function by electrically stimulating the neural pathways that have become unresponsive as a result of SCI. Ideally, the stimulation should closely approximate the pattern of activity that normally controls the targeted function. Such an approach has already been used to partially restore locomotion in primates. It has also been used to activate the leg muscles to improve blood-pressure control in people with an SCI, although the reasons for its apparent success in this setting were unclear.

Squair and colleagues set out to develop a more precise neuroprosthetic for blood-pressure control. Their starting point was the development of a rat model of SCI. Analysis of neuronal activity in the model confirmed that blood pressure and sympathetic responses were unstable in these animals. Owing to their small size, the rats did not experience orthostatic hypotension. However, the authors used a negative-pressure chamber to reduce air pressure around the lower body; this caused blood to pool in the lower body, replicating the phenomenon.

Next, Squair et al. asked where electrical stimulation (called targeted epidural spinal stimulation, or TESS) should be applied to trigger the sympathetic responses that alter blood pressure. They systematically stimulated spinal segments in the injured rats, and found that the animals’ blood pressure could be raised substantially by delivering electrical pulses close to the back side of the lower thoracic spinal cord. An impressive series of experiments — imaging and anatomical analyses, combined with computational modelling and manipulations to activate or inhibit neurons involved in the region — revealed that TESS elevates blood pressure by activating a subset of sensory afferent neurons (which transmit signals from the skin, muscles and internal organs towards the spinal cord). These afferent neurons indirectly excite the efferent sympathetic neurons that control the splanchnic circulation (the blood vessels of the abdominal organs).

The authors’ next, highly original, step was to design a biomimetic control device that continuously adjusted TESS to prevent any blood-pressure drop in the injured rats. They then went on to successfully adapt this ‘prosthetic baroreflex’ concept for rhesus monkeys. This involved systematically testing each spinal segment once again, to identify the segments that should be targeted by TESS, and scaling their neuroprosthetic to match the larger anatomy of the monkey. Finally, and most remarkably, the group demonstrated that the prosthetic baroreflex could restore blood-pressure stability in a person who experienced disabling orthostatic hypotension following an SCI.

This bench-to-bedside study is unprecedented in many ways, and, as such, raises several questions. For instance, the sensory afferent neurons that are stimulated by the prosthetic device are unidentified, and the long-term effects of their stimulation are unknown. The spinal circuitry is reconfigured after spinal trauma, and reflexes are exacerbated such that formerly innocuous stimuli can trigger episodes of dangerously high blood pressure. Time and further animal experiments will be needed to determine whether chronic activation of these afferent neurons will mitigate or aggravate hyperactive reflexes. Indeed, unlike the real baroreflex, the prosthetic baroreflex is presumably much better at preventing bouts of low blood pressure than it is at mitigating rises in blood pressure.

In addition, it is possible that the neuroprosthetic will have adverse effects on gastrointestinal and kidney functions, which are regulated by lower thoracic sympathetic neurons. Finally, an invasive procedure is required for the placement of an epidural electrode in the spine, and its long-term efficacy is unknown.

Nonetheless, this latest attempt to treat the disabling hypotension that follows SCI is grounded in a large body of preclinical neuroscientific evidence. It is the most sophisticated strategy developed so far. The approach could conceivably replace currently available treatments — although it is much too early to say this for sure.