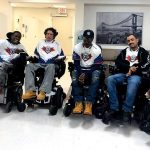 Chris Scott was falling towards the ground above Long Island, New York, when he realised that something was wrong.

An experienced skydiving instructor with around 6,000 jumps behind him, this should have just been another day at work. Strapped to Scott’s chest was a tandem jumper named Gary Messina, for whom the jump was an annual birthday tradition. 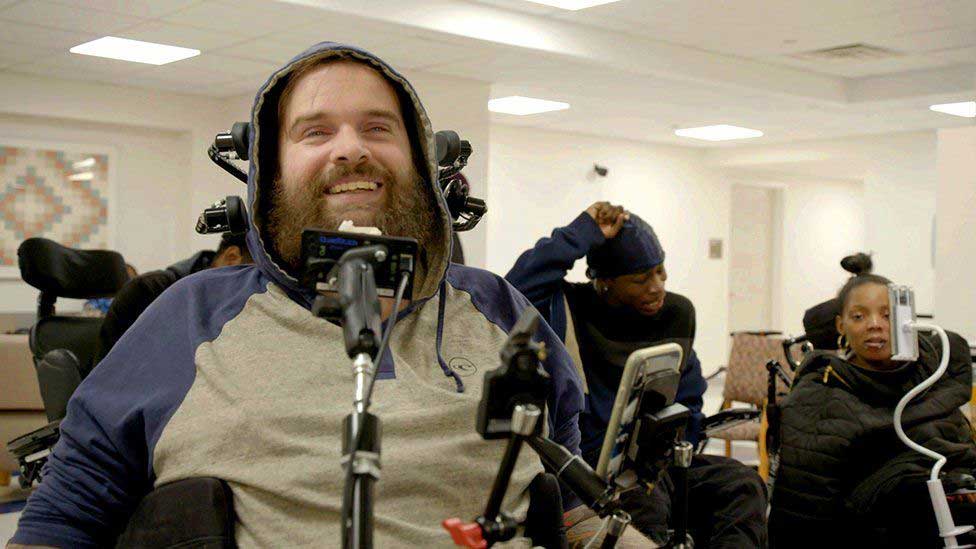 But when the men reached an altitude of 175ft, the parachute that had been slowing their descent suddenly collapsed. It had most likely been caught by a dust devil, a small unpredictable tornado that is the bane of skydivers, as it forms in the same clear conditions that are perfect for their sport.

Messina, a prison officer who was due to turn 26 the next day, died on impact with the ground. Remarkably, Scott survived, although he soon blacked out. “I remember staring at the ground – and that was it,” he later told reporters. He was airlifted to Stony Brook University Hospital.

When he woke up 11 days later it was early August 2014 and doctors told him he had broken his neck. He was paralysed from the shoulders down and lucky to be alive. “I was a light beam away from death,” he said.

Scott went to a specialist rehabilitation centre in Atlanta, Georgia, before moving back to New York to live in the same apartment building as his family. He used a mouth-operated joystick to move his wheelchair and regularly went to Mount Sinai Hospital in East Harlem to work on his rehabilitation.

It was there that he met Dr David Putrino in March 2019. In his role as the director of rehabilitation innovation at Mount Sinai, Putrino explored different ways of improving patient health. He used training methods associated with high-performance athletes, as well as technological solutions like virtual reality.

The pair met at a time when Scott was struggling to cope. He missed being part of a team and felt a lack of purpose in his day-to-day life. Putrino had been recommended as someone who might be able to help.

“We sat there staring at each other in silence for a little while,” says Putrino. “And then I was like: ‘Well, what do you like to do?'”

Scott replied that he loved playing video games against others. Putrino was surprised. “That was me being naive at that point,” he says, “because I’d never seen competitive gaming from someone as severely paralysed as Chris.”

They loaded a basketball game called NBA 2K into a PlayStation 4 at the hospital. Scott’s backpack hung from his wheelchair and he asked Putrino to reach inside and fetch a device for him.

The device had a mouthpiece with a joystick and different sensors that could be sucked on or blown into. This was Scott’s QuadStick and it helped him to play video games using his mouth.

Putrino mounted the QuadStick on to the wheelchair so that it lined up with Scott’s mouth. Then they began to play.

Scott moved the joystick with his lips. He could control the basketball players, making them pirouette, leap and throw, by puffing and sipping on the holes. “It was just incredibly dextrous and skilled,” says Putrino. “And all of a sudden he was kicking my ass at NBA 2K.”

The experience gave them an idea. They were both familiar with the growing industry of e-sports where gamers competed against each other in tournaments. What if they could use Scott’s video game skill and Putrino’s expertise in high-performance training as the basis for an e-sports team with other quadriplegic players?

Scott sent out a message to other patients at Mount Sinai to gauge interest. “This was the big test, because we weren’t sure whether anyone would reply,” says Putrino. But they didn’t have to wait long to hear back. “People contacted us immediately and they were saying: ‘We want a piece of this.'”

Blake Hunt was one of those who got in touch. He had played video games since he was a child. “I remember playing Nintendo with my brothers,” he says. Whoever came in first place had bragging rights for the day.

A talented American football player, Hunt was 17 when he broke his neck during a match for his high-school team. “I couldn’t really figure out a way to be competitive once I got hurt,” he says. “That’s where I got a lot of my enjoyment in life from. So I struggled with my identity for a while.”

After the accident Hunt couldn’t move his legs, but he was able to move his arms and wrists. Without full use of his hands, however, he couldn’t find a way to play the video games he’d always enjoyed.

“One day I got really angry, and I decided to game by any means possible,” says Hunt. Although he couldn’t move each finger individually, he could make his hand close by pulling back his wrist. By flexing his wrist back and forth, he discovered he could press the buttons and move the joystick of a specially-designed controller.

The first game he played was Call of Duty: Black Ops – a shooting game with a zombie mode that Hunt particularly enjoyed. Then he began playing American football on Madden NFL. It was a revelation. “That’s when I realised that I can still be as competitive as anybody,” he says.

Shortly after their call-out, Scott and Putrino held a meeting where they set out their vision for an e-sports team that could compete at the highest level. Hunt was one of those in attendance. Soon a group of eight people with paraplegia and quadriplegia were meeting up regularly to practice. “And from there it kind of skyrocketed,” says Hunt. 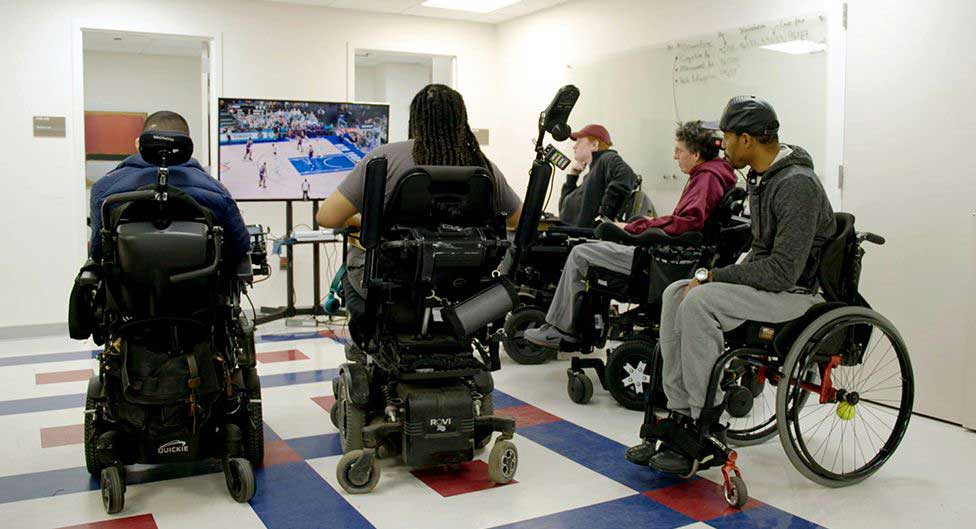 One of the first video games they played together online was League of Legends, a gladiatorial game where two teams battle each other in a fantasy setting. It is a game that relies on teamwork and, as they played, the different playing styles and characteristics of each team member came to the fore.

Sergio Acevedo was a laid-back, calming personality, while Richard Jacobs was lively, animated and often spoke in the third person as he played: “Good job, Rich!” Hunt could sometimes be heard singing at points of particular tension. Some of the team played by pressing pads with the side of their heads, while others manipulated controllers with their arms.

They found that playing together they were a formidable outfit. “Individually we had a hard time winning sometimes,” says Hunt. “But when we all came together, it was very hard to beat us.”

Nyree Stevens was another who responded to the initial call-out. Thirty years old and a keen artist, she uses her mouth to paint portraits of her friends. She was injured by a stray bullet on a night out with friends in Harlem when she was 18. “It was a gunshot wound to the neck,” she says. “I was in the wrong place at the wrong time.”

Video games have become an important part of her life. “It helps me get my independence back to be able to play,” she says. When she joined the team, she was the only woman. “You know what boys are like with their games,” she says. “They live for gaming. But I’m getting up there with them.”

“Gaming has been therapeutic. In many ways gaming has saved my life” -Blake Hunt Disabled gamer

Often the people that they played online – and beat – were non-disabled. Sometimes their opponents didn’t know who they were playing. “People don’t know,” says Hunt. “And it’s very liberating to beat them. That’s part of the fun.”

But with the growth in popularity of streaming platforms like Twitch, often gamers can see each other. Nyree Stevens enjoys it when her opponents can see her.

“A lot of people wouldn’t think that the person on the other side of the avatar is beating them by playing with their mouth,” she says. “So that’s totally cool.” 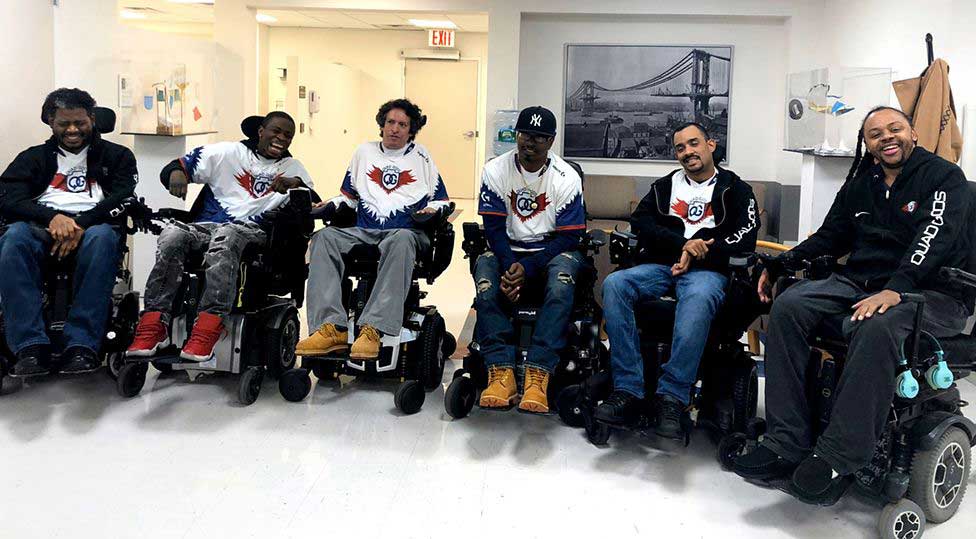 Practice paid off. By the summer of 2019, the team were ready to begin playing in competitions where prize money and greater prestige would be up for grabs. On the cusp of their first tournament in late July 2019, they held another team meeting.

Afterwards, Putrino remembers being with Scott as he left Mount Sinai for the day. “He stopped his chair and looked over his shoulder to ask me: ‘Do you really think we can do this? Can we really pull this off?'” Putrino told him that to get as far as they had they were already winning. Scott smiled and rode his chair out of the hospital.

A few days later, there was terrible news. Scott had died from a chest infection. “It was a shock to all of us,” says Hunt. “It’s still hard to deal with. We don’t really discuss it too much.”

“That was a big blow,” says Putrino. But he adds that for many disabled people, health is fragile. “You just never know what’s going to happen.”

The team got together and resolved to continue what Scott had started. Their team name would be the Quad Gods. “We call ourselves the Quad Gods because in our minds we’re all gods of our own lifestyle,” says Hunt.

They each came up with different alter egos. Hunt chose Shango. “He’s an African God of thunder, and when I bring the pain, I bring the thunder.” Richard Jacobs chose Zeus. Nyree Stevens chose SittinPrettii.

In the first competitive tournament they played in there were 99 teams, and the Quad Gods were hoping to finish in the top half. They came fourth. They began playing in – and winning – more tournaments online, finding particular success with the popular fighting game Fortnite.

As stories about their team spread among the gaming community, funding opportunities came their way. They received money to buy equipment and to launch as a legitimate e-sports team. The New Jersey Nets basketball team donated a gaming space. The Quad Gods began looking around for a full-time coach.

Their next goal is to place highly at a range of different e-sports World Championships next year. The Olympic Committee are strongly considering e-sports for the 2024 Olympics and, by securing a world ranking, the Quad Gods hope to qualify.

For the team, the benefits of competitive gaming have been considerable. “When we do things we enjoy, it releases stress,” says Hunt. “Stress is a killer in its own right. In that way gaming has been therapeutic. I’ve been in the chair since I was 17. I’m now 31. In many ways gaming has saved my life.”

“None of us would be together if it weren’t for Chris showing up to my lab one day and saying ‘Hey, I got to do something,'” says Putrino, known affectionately as “the Quadfather” by the team.

The Quad Gods logo was painted by the laid-back Sergio Acevedo, who, like Nyree Stevens, paints with his mouth. It is of a wheelchair being held aloft by wings.

“Chris will always be our captain,” says Hunt. “He’s our guardian angel and the wings embody that.”

For more stories about video games and disability, listen to Unplayable: Disability and the Gaming Revolution

Fatherhood no longer just a dream for men with severe spinal...