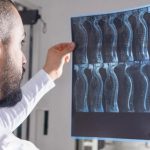 Previously untreatable spinal cord injuries may now be curable with a novel method of 3D bioprinting neural tissues established by researchers in China. The new 3D bioprinting solution could offer a method of rapidly and precisely engineering damaged central nervous system (CNS) tissue and other neuronal tissue. In the coming years, the system has the potential to be developed into a method of regenerative medicine that could reverse paralysis in patients who were previously incurable.

Recent Advancements in the Treatment of Spinal Cord Injury

The term Spinal Cord Injury (SCI) covers any damage caused to the cells and tissues that form the information highway that connects the brain and the rest of the body via the spinal cord. Damage to this circuitry often ends in partial or total loss of both sensory and locomotor function from below the location of the damage.

There is currently no cure for SCI, although there is a large and growing body of research developing cell-based therapies. Due to the success of this research, scientists are focusing their efforts on developing systems that allow for the regeneration of functional neurons in their search to establish a cure for paralysis. However, previous efforts to develop such a method have found that successfully repairing damaged cells is problematic.

Previous research has shown that while neural stem cells can successfully be implanted into sites of SCI, the viability of such cells has been poor and they have demonstrated uncontrolled differentiation, resulting in minimal therapeutic impact. To overcome this limitation, scientists are exploring how bioprinting enhances the success of such implants.

Recent studies have used bioprinted, cell-loaded scaffolds that can generate a beneficial microenvironment to encourage the growth of neurons. However, the efficacy of this technique is also limited, as questions have risen regarding the printability of such scaffolds and their efficacy at initiating cellular interaction.

Researchers from the Chinese Academy of Sciences and the University of Science and Technology of China have undertaken a collaborative project that has resulted in the development of a novel bio-ink for use in 3D bioprinting that congeals at room temperature. This aspect of the bio-ink can prevent neurons from differentiating into cells that are not implicated in the transfer of information via electrical impulses.

In a new study, published in the journal Biomaterials, the team outlines how the bio-ink can be 3D-printed into scaffolds that encourage interactions between cells, which is vital to reversing the paralysis caused by SCIs.

The team first created a bio-ink from natural chitosan sugars, hyaluronic acids, and matrigel, into which it then added rat neural stem cells. A BioScaffolder 3D bioprinter was then used to precisely place the mixture into cell-laden scaffolds, which were then placed in culture plates.

The scaffolds were then injected into paraplegic lab rats. Researchers determined that the viability of the scaffolds was 95% and that they could encourage the regeneration of neurons to such an extent that the once paraplegic rats began to regain movement of their hind legs. Over the course of 12 weeks, the rats regained more control of their limbs, with movement reemerging in the hips, knees and ankles. Pressure sensors that measured the strength of the animals’ kicks were used to demonstrate how the rats’ muscle strength increased over time.

It was concluded that the innovative 3D bioprinting method offers a potential therapeutic approach to curing human paralysis. While the technique is yet to be tested in human tissue, results from the animal model are promising, demonstrating the success of the bio-ink in combination with 3D bioprinting at creating precisely controlled, complex neural tissues.

For the method to be effective in human tissue, scientists predict that further development of the technique would be required to increase the precision by which it can regulate cell differentiation. It is likely that further studies will be conducted, and, if successful, these studies will lead to in-human testing.

A Potential Cure for Paralysis

The results of the study show that the 3D bioprinted neural stem cell-laden scaffolds developed by the Chinese team have the capability of repairing SCI in-vivo. The results are exciting as they show a method with a genuine possibility of being adopted for use in humans to cure paralysis. More research will be conducted to develop the method into a clinical application, which will likely recruit experts in the field of neural tissue engineering. It is possible that the approach will also be useful for generating other regenerative medicines, not just for SCI.