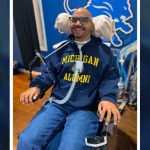 In between classes, Drew Clayborn attempted a backflip. He landed on his head, broke his neck and received CPR until medics arrived at Walled Lake Central High School near Detroit.

He woke up at University of Michigan Health C.S. Mott Children’s Hospital unable to feel anything below his mid-neck.

“It was just always just about the next thing, honestly,” Clayborn said. “In the hospital, you’re constantly learning new things: new tech, therapy activities, managing my ventilator – all that learning kept my mind off the magnitude of the injury and focused on other goals.”

How do I get back to doing life? That question motivated Clayborn from the moment he was discharged in July.

It propelled him back to a marching band, using an adaptive musical instrument digital interface (MIDI) synthesizer activated by a mouthpiece, that went on to win a state championship. It drove him to finish high school and later attend college at the University of Michigan, away from his in-home support system.

“A lot of the time, people put onto you what is possible, what you are capable of and what the future is going to look like after an injury like this,” said the now-27-year-old Clayborn. “I’ve always been able to look at life in an open lens. I’m open to life, not afraid of it.”

Drew’s success after his injury is fueled by his passion for living. That resilience is a key factor associated with positive psychological outcomes after a traumatic spinal cord injury, according to recent research from Michigan Medicine.

In an assessment of more than 450 people with spinal cord injury, researchers found that flourishing, defined as the pinnacle of good health and sense of well-being, can occur with all levels and severity of diagnosis. The study was funded by the U.S. Department of Defense.

“How we think about ourselves and our health and who we compare ourselves to influence what we think is possible and what steps we are willing to take – these factors are more important than the severity of injury, health complications or money,” said Michelle Meade, Ph.D., senior author of the paper and co-director of the University of Michigan Center for Disability Health and Wellness.

“Our research suggests that there may be a unique psychological profile among individuals who see their lives as important and meaningful,” said Meade, who is also a professor of physical medicine and rehabilitation at U-M Medical School.  “While some of these characteristics may be inherent, as we see with Drew, others may be able to be learned or facilitated through psychotherapy, structured supports or other types of interventions.”

In addition to resilient personality profiles, survivors of spinal cord injury were more likely to flourish if they had people they could count on, the skill to maintain good relationships and sufficient cognitive capacity, according to the results published in Rehabilitation Psychology.

“I was lucky that my brain was not affected by my injury, so that I knew I could learn, very quickly, all the technology that was placed in front of me,” Clayborn said.

“There can be a lot of obstacles in the way. Even the obstacle of getting out of bed and into my chair every day can be seen as daunting. For us, we see it as an opportunity. With my dad, my family and my community – all the support I had – we created our own narrative.”

Every journey is different

After fracturing his C1 and C2 vertebrae, Clayborn sustained complete quadriplegia. He’s made progress utilizing wearable therapy and other interventions, gaining significant muscle mass. But he doesn’t like to compare himself to others with spinal cord injury.

“If I talk to someone who is in a similar situation, it’s always easy to look at somebody and be like, ‘Well, you have movement in your arms, how are you depressed?’” Clayborn said.

“I feel like that’s ignorant and inconsiderate of them and their situations. I try to see everybody for who they are and try to meet them wherever they are at. The only way to work past it is to acknowledge your situation for what it is and move forward.”

In the study, researchers found individuals with spinal cord injury were least likely to flourish if they compared themselves negatively to others and experienced their own health as being poor.

People can often get stuck in feelings of anger and unfairness, causing them to focus on what they have lost instead of what they can do, Meade says.

“In order to flourish with spinal cord injury, you have to be able to see the possibilities and adapt to new ways of doing things,” she said. “Not being able to problem solve or having a rigid personality makes that harder, as does a poverty and a lack of resources or opportunities.”

This makes sense when you consider how many new skills people with spinal cord injury are asked to build over the course of their lives, starting almost immediately after injury, says Ted Allaire, M.S., lead author of the study and an incoming postdoctoral fellow at Michigan Medicine.

“The good thing is that there are resources, like cognitive-behavioral therapy, designed to help people become more psychologically flexible. Rehabilitation psychologists often provide these therapies to people with disabilities, including those living with spinal cord injury.”

Solidarity through the Drew Crew

At the time of Clayborn’s accident, his family and community rushed to his aid. They started an organization called “The Drew Crew” to raise money that allowed Clayborn to have a full-time nursing staff, purchase adaptive equipment and gain independence.

Eventually, the Drew Crew became a registered nonprofit with a mission of helping people with spinal cord injury or other forms of paralysis. With Clayborn serving as the CEO, they raise money to provide resources and offer guidance and mentorship to “show that those who have suffered a catastrophic injury can still live a complete and fulfilling life.”

Since 2010, the organization has helped dozens of individuals with different resources and accommodations.

“Early after an injury like this, you really don’t know what this life entails,” Clayborn said.

“My dad navigated all of this to help me. So, we want to help others make sure they have nursing care, the technology they need and an independent lifestyle, so they can really live the way they want. We’re trying to do things beyond what some people might see as imaginable. My life matters. It’s better that I’m here now than if I had died that day. Now, I’m able to show that to others as well.”

Being able to connect with others with spinal cord injury and go through the process together is critical in getting a sense of what a person can expect from oneself, Meade says.

Brain Implants Move at the Speed of Thought