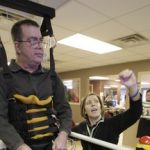 Scott Crawford wants to walk again. In September, a pile of wooden pallets fell on Crawford. The accident left him unable to move his legs because of a spinal cord injury.

Crawford, 51, went from driving a tractor-trailer to negotiating a wheelchair. His arms were also affected by the accident, and he’s been relearning to use his body. These days, he can scoot in and out of his wheelchair with the help of a board.

But he can’t sit up on his own. He can’t roll over in bed. He can’t lift himself up off a surface.

Twice a week Crawford goes to Cardinal Hill Rehabilitation Hospital for physical therapy. He straps into a robot that helps him walk.

Called the Lokomat, the machine has been at Cardinal Hill for just over a year. It was donated in honor of Dusty Hicks, a Woodford County High School swimming star who injured his spine in an accident. Several months after the machine was donated, Hicks committed suicide.

Patients travel from as far away as Paducah to walk in the Lokomat.

The idea behind the machine is that repeating the motion of walking helps the spinal cord remember.

“The spinal cord recognizes that pattern and then starts changing,” said Susan Harkema of the Frazier Rehab Institute at Jewish Hospital and St. Mary’s HealthCare in Louisville.

“So it can relearn to walk even when the input from the brain is compromised,” she said.

Just over a decade ago, doctors thought that spinal cord injuries were permanent. They thought that in the six to 12 months after an accident, patients regained all they could. But they now know that recovery continues to occur and that the spinal cord can relearn how to walk even though it isn’t getting the correct signals from the brain.

“The spinal cord is much more sophisticated than we ever thought,” Harkema said.

The spinal cord can take in information such as the amount of weight on a leg or whether a muscle is flexed, Harkema said. It then uses that information.

“The spinal cord can make a decision on how to move a leg,” she said.

The Lokomat allows patients to practice walking, over and over again, said Kara Lee, a physical therapist at Cardinal Hill. Lee can change how much effort patients contribute, how much weight they’re supporting and how fast they go. She can also use a virtual-reality system to make patients turn corners or step over objects.

At Frazier, Harkema and her staff use a different process than the Lokomat for locomotor training, as the therapy on the Lokomat is called.

As with the Lokomat, the patients are strapped into a harness that holds them above a treadmill. Depending on the patients’ ability, therapists adjust the amount of weight on their legs. Then three therapists, positioned at the patient’s legs and hips, help the patient walk.

Lokomats are popular at rehabilitation hospitals such as Cardinal Hill, said Harkema. But whether the machine works better than the method used in Louisville, manual facilitation, is still unproven.

“What we don’t know right now is how effective it is,” Harkema said. “There’s not a lot of evidence one way or the other.”

“The Lokomat has made us more efficient with helping out people reach their maximal goals,” she said.

At Cardinal Hill, Lee uses the Lokomat for patients who need lots of practice walking. She has different tasks for patients who are further along, such as jumping water bottles on a treadmill.

The Lokomat is better than not doing anything, if manual facilitation isn’t available, Harkema said.

Putting weight on their legs helps patients in other ways than just standing and walking. It activates muscles in the torso, helping patients to sit better. It also improves circulation and breathing.

Crawford hopes he’ll be one of the patients who learns to walk again with the help of the Lokomat and other physical therapy interventions.

In the accident, he hyperextended his spinal cord, causing it to swell up. His injury isn’t complete, meaning he has a chance to recover some of what he lost. But doctors can’t predict how much.

When Crawford was first injured, he couldn’t move his legs. His arms were also affected by the accident. His hands are weak, and his fingers are curled.

Since the accident, he has relearned how to do many things: He can hold a phone and punch the buttons, take his own medicine, brush his teeth and shave. He can fix microwave dinners and open a soda.

But there are many things Crawford wants to be able to do. His short-term goal is to stand up, turn around and sit down.

“If I could do that, it would make a big, big difference in my life,” he said.

For someone who isn’t paralyzed, it’s hard to imagine how much freedom the move offers, said his mother, Joanne Brooks.

“He could stand, swivel, sit down in the car seat without somebody else helping him,” Brooks said. “Stand, swivel and get in the bed and out. Going to the bathroom. All those things you do without thinking about it.”

Crawford lives with Brooks in her Frankfort home. The bottom floor has been converted into a living space for him.

Lee expects that eventually Crawford will be able to walk around his home.

Some days Crawford isn’t sure he’ll be able to walk again. But he’s trying to remain open to the idea.

“I could fool myself, just like when I thought my legs wouldn’t move again,” he said. “I’m open for everything.”

Bills’ Kevin Everett Walking On His Own In and Out Of...