A homecoming to remember 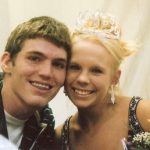 It was a homecoming to remember as Central welcomed back J. Johnson and honored him as the school’s basketball king on Friday night.

It was Johnson’s second appearance of the week at a Central ballgame after his Jan. 19 release from Saint Francis Hospital in Tulsa. He had been there since suffering a serious spinal cord injury in a Dec. 27 car wreck.

The Central senior said it’s great to be back in Sequoyah County and he enjoyed watching the Tigers play.

“First of all, anything is better than being at the hospital. Being home is nice,” said Johnson. “I thought the games would be hard for me emotionally to watch, but it’s not bad.”

The three-sport star received a loud ovation when he was selected as homecoming king. He then posed for pictures with his girlfriend—homecoming queen Emily Owens—and the rest of the court before watching the Tigers take on Gore.

“I got king, which I didn’t think I needed, but they gave it to me anyway.They told me I was going to get it, then they kind of told me I wasn’t. They tried to keep it a surprise as best they could,” said Johnson.

The Central boys lost the game on Friday, but Johnson had witnessed their win over Warner on the previous Tuesday.

“They got a good three-game streak going and I think they’re playing good,” he said of his teammates. “I know that team has a lot of effort since I played with them and I know how those guys are. They’re doing good and their effort will make them win games.”

Johnson described his injury as a bruised spinal cord between the T3 and T4 vertebrae in addition to a cut T6 vertebra.

“The T6 vertebra has nothing to do with my paralysis, it’s the bruise on my spinal cord that’s causing it,” explained Johnson.

“It’s a bruise and, hopefully, that bruise will heal in a few months and we’ll see,” he added. “There’s hope, I promise. There’s a bunch of chances I’ve got, but it takes time. They said it will take 12 to 18 months for the swelling to go down completely in my spine. It could go sooner or it could take a little longer.”

Johnson’s road to recovery began at Saint Francis with rehabilitation to prepare him for his release from the hospital.

“I did five to eight hours a day up there, but they were just trying to get me to come home. What I was doing up there got me home quick. Now I’ve got to go over to Fort Smith and perfect my skills and get good at them,” said Johnson.

“When I was up there, they told me I was doing extremely well. Those people up there are the most encouraging people. I still keep in touch with some of my therapists up there.”

Now that he’s out of the hospital, Johnson is preparing to begin rehab Feb. 5 at HealthSouth in Fort Smith.

“I’ll go three times a week for an hour and then I do four times a week at home for probably two hours,” said Johnson.

The injury won’t stop Johnson from graduating this spring. He’s been keeping up with his classwork at home in addition to taking a pair of college correspondence courses.

However, he can‘t wait to resume his senior year at Central High School.

“I’m going to go back to school as soon as I can. My blood pressure is still out of whack because of my spinal cord injury, but as soon as it gets regulated then I’ll go back. I don’t know when it will be, probably a couple of weeks,” he said.

Johnson said his family and friends have been very supportive.

“Without that, I probably wouldn’t have done as well. To wake up everyday and know people care about you helps a lot. Sometimes I’ll get a text message in the morning from someone saying ‘Good luck in therapy,’” said Johnson.

He’s also grateful for the support he‘s received from the community.

“I knew there were people who cared about me, but I didn’t realize how many there were. I couldn’t believe 600 people would show up at Sallisaw,” Johnson said, referring to a benefit dinner that raised more than $7,000 during the county tournament.

Throughout his ordeal, Johnson has displayed the positive attitude and determination that has made him a standout in football, basketball and baseball for the Tigers.

“That’s the way my parents raised me. They always said good things happen to positive people,” said Johnson. “I just try to stay as positive as I can and hopefully everything will work out.”

There will be a benefit chili supper for J. Johnson on Feb. 6 from 5-7 p.m. in the Muldrow High School cafeteria before the games against Spiro. The supper is sponsored by the Muldrow Senior Class and Student Council. Members are selling tickets for $5 each and they may also be purchased at the door.