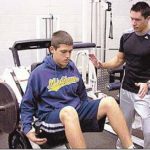 WALLED LAKE – From great adversity, heroes can emerge. They then can inspire and lead others to become more than they ever imagined. Walled Lake Central High School physical education teacher Kirk Pedersen, who suffered a severe spinal cord injury Oct. 25 when he fell out of a tree stand and broke his neck, is considered a hero by staff and the 1,600 students at the school where he has taught for four years.

Pedersen, 38, of Northville and a graduate of Eastern Michigan University, was transferred from a facility in Louisville, Ky., on March 25 to the Mary Free Bed Rehabilitation Hospital in Grand Rapids.

Free Bed is a long-term care facility for those with spinal cord injuries.

Pedersen injured his spine at the fourth cervical vertebrae, leaving him without movement or feeling from the armpits down.

“They told him he wouldn’t be able to swallow and he already can swallow,” said Nancy Attisha, who teaches Spanish at the high school and often worked out with Pedersen.

“I’m telling you, he’s every kid’s hero in this building,” she said of the school at 1600 Oakley Park Road.

“I think that Kirk has always been such a positive person he will be able to fight the demons in the mind that say you won’t recover,” his brother, Brett, 29, of Chelsea, said Friday.

Some students also thought that Pedersen was extraordinary and perhaps capable of doing the near impossible.

After his injury, “the students thought he’d be back walking the next day,” Attisha said. “They said he was Superman, and Superman was coming back.”

Pedersen fell about 20 feet from a deer stand in a tree near Dexter, in Washtenaw County.

He laid on the ground alone and injured for nearly seven hours before he was found. He was airlifted to the University of Michigan Medical Center, transferred to Kentucky and returned to Michigan to be closer to his family.

His brother, Brett had gone to an emergency room the day before Kirk’s accident because of an allergic reaction.

“The first thing he asked me when we found him lying on the ground in the woods unable to move was ‘Are you OK, Brett?’ ”

The type of spinal cord injury Kirk Pedersen suffered often leaves a patient unable to breathe without a ventilator and unable to move or feel any part of the body below the armpits.

On March 24, a several hundred students, faculty and community members gathered in the gymnasium at the school for a Fitness Challenge and Silent Auction to raise funds to help Pedersen during his recovery.

Physical education teacher Tracy Borders, who worked at Central with Pedersen, said the Fitness Challenge raised $38,800 and that amount has since climbed to $40,000.

The money is to be used to buy Pedersen an adapted van with a wheelchair lift.

“There were 600 to 700 people at Walled Lake Central for the Fitness Challenge,” she said.

By JERRY WOLFFE
Of The Oakland Press