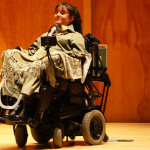 At 11 years old, Brooke Ellison was just like any other kid. She danced, she sang and she enjoyed playing in her neighborhood with her friends. That is until her life changed in an instant. “One day I’m walking home from school, anxious to play with my friends, and the next I’m confined to a wheelchair, breathing with the help of a tube,” says Ellison, now 30, of the car accident that ended with a one-year hospital stay from a spinal cord injury. It is then that she decided that she would become an advocate for stem cell research, “I wanted to help further the issue in any way that I could.”

Ellison now spends her days traveling to different schools and communities across the country to educate the public on stem cells and how millions of people could benefit from them. Ellison, along with her organization, the Brooke Ellison Project, recently made a stop at Stony Brook University on Mar. 25.

The event, sponsored by the College of Engineering and the Women in Science and Engineering program, included a speech by Ellison, a screening of the documentary “Hope Deferred,” and a panelist discussion. The panel included experts and researchers from all over the field including biomedical engineering, medical humanities, compassionate care, and bioethics. Turnout to the event, which was held in the SAC auditorium, drew over 100 people, including a few who would benefit from stem cell research themselves.

The documentary “Hope Deferred,” by Jimmy Siegel, gave the audience a wide understanding of what Stem Cells were and how scientists go about getting them. Siegel owns a well-known creative services business and has worked with the likes of Hillary Clinton and Eliot Spitzer.

“The film takes the issue out of the political sphere and brings the issue into a new light — one involving human life,” Ellison said.

According to the documentary, “Stem cells are unique cells that have the ability to both self-renew and to develop into other types of cells in the body.” For people suffering from diabetes, spinal cord injuries, neurological disorders, cancer, Lou Gehrig’s disease, multiple sclerosis, and various other diseases, stem cells could mean relief from the pain they have been suffering for years.

“A world without Alzheimer’s and Lou Gehrig’s disease is a world we can look forward to,” says Lawrence Goldstein, the director of the stem cell program at the University of California, San Diego, who was quoted in the documentary. Many people interviewed in the documentary agree with this statement, including family members of those suffering from incurable diseases.

Douglas Melton, the co-director of the Stem Cell Institute at Harvard University, has a son and daughter who both suffer from diabetes. For him, stem cells would take away the painful insulin shots and multiple pills that he has to watch his children take every day.

For Kieran McGovern who suffers from Friedreich’s Ataxia, a painful neurological disorder, stem cells would mean being free from a wheelchair and the ability to walk. McGovern, though, doesn’t let this stop him from having a positive outlook of the world, “You have to take a bad hand that you got and use it to better the world.” Both Melton and McGovern were contacted by the Brooke Ellison Project and interviewed in the documentary.

While stem cells could be a very beneficial thing to many, there is still the argument of where they are taken from, and the biggest road block of them all: When does life begin? For many, stem cells is thought to be murder — killing innocent embryos — thought to be at that stage, humans. According to the Brook Ellison Project, this is a misconception they want to dispel.

Stem cells, according to the documentary, are frozen in vitro fertilization embryos that are due to be discarded. And one of the most important pieces of information the panel wanted the audience to walk away with is the fact that stem cells are taken out only four days after the egg has been fertilized. According to one panelist, one shouldn’t call it an “embryo,” they should be using the correct technical term, which is “blastocyst.”

According to the documentary, calls were made to pro-life organizations asking for comments on their side of the argument. None of the calls were returned.

The panel said that the problem with trying to dispel this misconception was the fact that this argument has been going on for years and that the fire is fueled every year by politicians, with each party supporting a different side.

“It’s shameful that politicians would use it as a thing to divide us,” Melton said. For stem cell research supporters, it is a moot argument that’s standing in the way of a daily life that could be pain-free.

The argument that Stem Cell research involves killing innocent embryos isn’t the only argument that’s making waves in the research field. For so many, the words “stem cell” have become synonymous with “cloning.”

According to a presentation given by Michael Hadjiargyrou, Stony Brook University’s Associate Vice President of Research and Associate Professor of Biomedical Engineering, stem cells have nothing to do with cloning and scientists have no interest in cloning an infant. “Cloning, it’s stuck in the public’s mind and were stuck with it in the debate,” said Jonathan Moreno, a Professor of Medical Ethics at the University of Pennsylvania.

The way Ellison views it, the political spectrum isn’t involved. “It’s about scientific truth and how we care for each other.”

As the event came to a close, Ellison brought up the bill that President Obama recently signed, that gives more federal funding to Stem Cell research. While it is a step in the right direction, Ellison made a point to say that the field still needs much support. “We still need do to a lot more work on stem cells. We already lost eight years because of ex-President Bush and his ban,” Hadjiargyrou said.

For many, including Ellison, the idea that research is no longer banned, has made the organizations days a little bit brighter. “Research provides the very basis that keeps my hope alive,” says Ellison.

For now, those suffering from an incurable disease, will have to take it one day at a time and hope that future generations will not have to suffer like they’ve been doing. “I’m walking in my dreams. But I have to wake up and face reality and hope that one day it will change,” McGovern said.