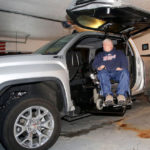 From the seat of his motorized wheelchair, the 48-year-old sweeps the floor of his garage as his “sidekick,” a golden retriever named Annie, gnaws on a bone. As he scoops the dust into a garbage can, Baetke motions to another sidekick nearby.

At first glance, the 2015 GMC Sierra parked in the adjacent bay doesn’t appear to be anything special.

Then, with the push of a button on his key fob, the vehicle’s gull-wing door opens, and a hydraulic-powered platform lowers to the ground ready to lift Baetke into his truck.

“It’s an eye-catcher,” said Baetke, who purchased the pickup last year after not driving one for almost 30 years. “I’ve waited a long time for this.”

Ryan Baetke of Mount Joy was injured in a diving accident in 1986 and has had to use a wheelchair ever since. This year, he bought a new truck and had it modified to meet his need by All-Terrain Conversions in Markle, Indiana.

The man who grew up on his family’s farm in Eldridge last drove a truck in high school, prior to a diving accident in the summer of 1986 that paralyzed him from the waist down.

He jumped head-first into a shallow outdoor pool at a friend’s home and broke his neck. The then-teenager spent five months recovering and strengthening his body in a Davenport hospital.

During his stay, Baetke regained control of his arms, but the injury wiped out fine motor skills in his hands and fingers.

However, five years after his accident, a tendon transfer gave the quadriplegic the ability to pinch and grip with his right thumb, which allows him to drive and carry out several other everyday tasks.

It takes about 30 seconds for the machine to hoist Baetke into his vehicle. Once he’s situated, customized controls let him steer with his right hand and operate the accelerator and brake with his left hand.

All-Terrain Conversions, a company based in Markel, Indiana, modified his truck and Nu-Trend Accessibility Systems in Moline installed a specialized steering, accelerator and brake system.

Among other advantages, the new rig has made parking “a lot easier.”

The addition extends the width of his vehicle about 3½-feet, which he added, is more compact than the “old worn-out” van he drove the previous 10 years.

“It’s old to me now, so it still surprises me when I see everybody pointing at me or commenting,” said Baetke, who refers to his new wheels as a “DeLorean with horsepower.”

“I didn’t like the attention for a while, but now I don’t even think about it,” he continued. “I’m just glad that I have it.”

When he’s not working, Baetke said he keeps pretty quiet and lazy this time of year, unless it snows.

He prides himself on plowing his driveway “as long as it’s light and fluffy snow,” raising his 8-year-old daughter and driving himself to his full-time IT job at Lee Enterprises.

Although he needs help with a few simple tasks, such as slipping on his socks and tying his shoes, he’s learned to live a fairly independent life.

“I am what I am,” he said Monday, sipping a beer in front of his fireplace.

His phone sounded with a text message from his mother, asking if she needed to stop by. She helps him get ready for work every morning.

In the coming year, Baetke hopes to convert one room in his single-level house to accommodate a live-in nurse or qualified assistant. He also wants to replace his motorized chair at some point.

For now though, he’s still thrilled about his truck.

The Evolution of Cervical Disc Surgery