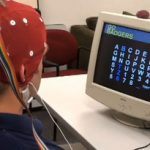 In early April, Adam Wilson posted a status update on the social networking Web site Twitter – just by thinking about it.

A University of Wisconsin-Madison biomedical engineering doctoral student, Wilson is among a growing group of researchers worldwide who aim to perfect a communication system for users whose bodies do not work, but whose brains function normally. Among those are people who have amyotrophic lateral sclerosis (ALS), brain-stem stroke or high spinal cord injury.

Some brain-computer interface systems employ an electrode-studded cap wired to a computer. The electrodes detect electrical signals in the brain – essentially, thoughts – and translate them into physical actions, such as a cursor motion on a computer screen. “We started thinking that moving a cursor on a screen is a good scientific exercise,” says Justin Williams, a UW-Madison assistant professor of biomedical engineering and Wilson’s adviser. “But when we talk to people who have locked-in syndrome or a spinal-cord injury, their No. 1 concern is communication.”

In collaboration with research scientist Gerwin Schalk and colleagues at the Wadsworth Center in Albany, N.Y., Williams and Wilson began developing a simple, elegant communication interface based on brain activity related to changes in an object on screen.

The interface consists, essentially, of a keyboard displayed on a computer screen. “The way this works is that all the letters come up, and each one of them flashes individually,” says Williams. “And what your brain does is, if you’re looking at the ‘R’ on the screen and all the other letters are flashing, nothing happens. But when the ‘R’ flashes, your brain says, ‘Hey, wait a minute. Something’s different about what I was just paying attention to.’ And you see a momentary change in brain activity.”

Wilson, who used the interface to post the Twitter update, likens it to texting on a cell phone. “You have to press a button four times to get the character you want,” he says of texting. “So this is kind of a slow process at first.”

However, as with texting, users improve as they practice using the interface. “I’ve seen people do up to eight characters per minute,” says Wilson.

Tweets are displayed on the user’s profile page and delivered to other Twitter users who have signed up to receive them. “So someone could simply tell family and friends how they’re feeling today,” says Williams. “People at the other end can be following their thread and never know that the person is disabled. That would really be an enabling type of communication means for those people, and I think it would make them feel, in the online world, that they’re not that much different from everybody else. That’s why we did these things.”

Schalk agrees. “This is one of the first – and perhaps most useful – integrations of brain-computer interface techniques with Internet technologies to date,” he says.

While widespread implementation of brain-computer interface technologies is still years down the road, Wadsworth Center researchers, as well as those at the University of Tübingen in Germany, are starting in-home trials of the equipment. Wilson, who will finish his Ph.D. soon and begin postdoctoral research at Wadsworth, plans to include Twitter in the trials.

Williams hopes the Twitter application is the nudge researchers need to refine development of the in-home technology. “A lot of the things that we’ve been doing are more scientific exercises,” he says. “This is one of the first examples where we’ve found something that would be imediately useful to a much larger community of people with neurological deficits.”