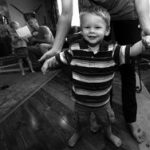 Driven mostly by hope, two California families will travel more than 6,000 miles to China for an experimental stem-cell treatment for their children.

Aleesha and Michael Klomp of Hanford, California, say they don’t need guarantees – they’re willing to take a chance so their son Gryphon Klomp, 2, might walk and grasp a spoon some day soon.

Both toddlers have cerebral palsy. Their families’ situation highlights the real-world effects of the prolonged national debate over stem-cell research.

That research in the United States has been delayed amid concerns about the use of stem cells taken from embryos destroyed in the process. The families want to use stem cells from donor umbilical cord blood – but even that form of treatment has not progressed here as fast as it has overseas.

President Barack Obama’s administration this month proposed looser restrictions on stem-cell research than those that the Bush administration had enacted, yet it could be years before the United States catches up to other countries in therapies offered to the public.

The families don’t think their children have that much time.

“Why would I wait five years to help him?” asked Michael Klomp, a construction worker.

The treatments Gryphon and Brooke will receive are not approved by the federal Food and Drug Administration. While research may be promising, the effectiveness of stem-cell treatments from cord blood for cerebral palsy has yet to be proven, say researchers in the United States. They caution people not to get their hopes up.

The Klomps and Schmidt are undeterred.

Doctors have transplanted cord-blood stem cells, but typically the cells are used for treating blood diseases such as leukemia. Using the cells for treatment of other diseases – juvenile diabetes, spinal cord injury, stroke, cerebral palsy – remains an emerging science.

Cerebral palsy generally occurs from damage to the brain in the womb or early infancy. It can affect coordination and muscle movement.

There has been no published scientific study to support the notion that cells from cord blood can grow into nerve cells or other critical brain cells, said Weissman, director of the Stanford Institute for Stem Cell Biology and Regenerative Medicine at the Stanford School of Medicine.

“I wouldn’t risk my own child to unapproved therapies,” Weissman said.

But some researchers say umbilical-cord stem-cell treatment might be beneficial in some cases of cerebral palsy. And there’s probably no harm in trying, they say.

Dr. David Pleasure, director of the Institute for Pediatric Regenerative Medicine in Sacramento, Califonia said it’s unclear whether cells from cord blood could form new neurons that would last for life. But there may be the potential for the cells to have some therapeutic effect, he said. “It depends on what is causing the cerebral palsy.”

Pleasure said he wouldn’t “dampen the fires of the families” seeking umbilical-cord stem-cell treatments for their children.

Support from both medical community and friends

Marrash said she’s not a doctor and doesn’t endorse any particular treatment, such as the stem-cell treatments Gryphon and Brooke will receive. But “we’re very excited for them, and we’d be excited to see what the outcomes were.”

The Klomps said they were encouraged after hearing about a Duke University study involving umbilical-cord stem cells to treat cerebral palsy in children.

Researchers have not released results of the small study of about 40 children, but anecdotal reports suggest at least some of the children – including a boy from Sacramento – have improved. The Klomps said they tried to get Gryphon enrolled in the study, but he was not a candidate because the study involved using the children’s own cord blood. The Klomps did not bank Gryphon’s cord blood when he was born.

But that research spurred them on. The Klomps, both 29, have raised more than US$50,000 for the stem-cell therapy and travel expenses. Aunts in Iowa baked 5,400 cookies that raised US$5,000 at a bake sale, and a dinner in Hanford brought in more than US$16,000.

Next Thursday the family plans to fly 12 hours to Beike Biotechnology in Hangzhou, China, where Gryphon is scheduled to receive seven stem-cell treatments over six weeks. The cells either will be infused through an intravenous line into Gryphon’s blood or inserted into his spinal cord, depending on what doctors determine after examining him, Michael Klomp said.

Schmidt, 28, a student at College of the Pacific and a soccer coach, is trying to raise money to be able to take Brooke to China for six treatments in July. A fundraiser is planned for today at the First Church of the Nazarene in Fresno.

Brooke’s father, Todd Jordan, 28, of Hanford, said he and fiance Lindsay Poole will organize a golf tournament and a dinner to raise money after the two wed next month. Both plan to fly to China.

Denise Moradian, a neighbor of Schmidt, supports the fundraising efforts. “How could you not try to raise the funds to give this child an opportunity to have a normal life?”

It has been a long wait for families with children who might benefit from stem-cell therapies.

“I’m very frustrated that it took Obama getting into office to even look at stem-cell treatments,” Schmidt said. “The United States is 20 years behind China.”

Help is coming, but slowly

Stem-cell research has been mired in controversy over the use of embryonic stem cells, which requires the death of the embryo. But the Obama administration guidelines – while loosening regulations – don’t completely open the door.

Stem-cell research will only be done on cells from surplus embryos at fertility clinics. No federal money will go to the creation of stem-cell lines created specifically for research purposes.

But researchers hope more money will be available from the federal government.

An increase in funding could allow for more human stem-cell trials to be conducted in the United States, said Maria Pallavicini, dean of the School of Natural Sciences at the University of California at Merced. Pallavicini has studied cord blood stem cells and adult bone marrow stem cells for years. Researchers at the Merced campus are studying embryonic stem-cells to try to understand how the cells decide what they are going to do, she said.

Pallavicini advises people considering treatments at overseas hospitals to question the reputation of the institutions and determine their success rates for the treatment.

Beike Biotechnology in China made no promises of a cure or that the treatments would help Gryphon, said Michael Klomp. But the company claims 80 percent of children and adults who have received treatments for cerebral palsy and other disorders have shown some improvement, he said.

Klomp said he also found about a hundred testimonials on the Internet from recipients of the treatments.

Jordan said he hopes for the same positive results for Brooke. “That’s pretty much what we’re basing everything on,” he said.

Pallavicini said people should be careful not to make decisions based solely on anecdotal stories. “I would certainly look for a scientific study or ask someone to interpret a study before one is going to travel,” she said.

Watching and waiting, and hoping

Klomp said he’s comfortable with the family’s decision: “We understand that nothing may happen. But what if something does happen? For us it’s worth it to try.”

He’s not expecting big improvements for Gryphon from the stem-cell treatments, he said. “If there was a chance he could walk, that would be awesome – but if he could use a spoon when he ate, that would be great.”

Gryphon’s cerebral palsy resulted from too much bilirubin, a toxic chemical in his body that rose to alarming levels a few days after his birth, his parents said.

Gryphon did not sit up by himself until he was 1 year old, Aleesha Klomp said. Only in the past three months has he crawled, dragging his legs behind him, she said. And on a recent afternoon, when the tow-haired boy stands unassisted for three seconds, he gets a cheer from dad.

Gryphon receives physical and occupational therapy twice a week at the United Cerebral Palsy office in Hanford and once a week from a Kings County Department of Education therapist who works with Gryphon at home. Aleesha Klomp also works with him daily.

Schmidt said therapy has helped Brooke, but she’s determined to get her to China for stem-cell treatment. Her daughter’s left leg and left arm are almost completely paralyzed.

She decided to take Brooke for treatment after meeting Aleesha Klomp a few weeks ago. The mothers were at the children’s United Cerebral Palsy therapy session in Hanford.

“I had a good feeling about it,” Schmidt said.

Schmidt and Jordan will know the results of Gryphon’s treatment before they take Brooke to China. Jordan wants to see how that goes, he said. Schmidt said that won’t change her plans.

How Exoskeletons Can Help People With Paraplegia Walk Again