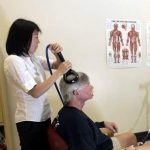 A car crash more than four years ago damaged Veronica Centrowitz’s spine and put her in a wheelchair, where, despite much physical therapy, she remains.

But now Centrowitz is taking part in an experimental treatment that might help coax back to life the disrupted path from her brain through her damaged spinal cord to her legs, perhaps someday enabling her to walk again.

The Thornwood resident is participating in an experiment at Helen Hayes Hospital in West Haverstraw that is trying to see if the brain-to-muscle pathways that are damaged when the spinal cord is injured can be retrained to improve movement control.

“The goal is to improve the brain-to-spinal cord connection,” said Dr. Aiko Thompson, a researcher at Helen Hayes.

The experiment, which is being done with scientists at the Wadsworth Center in Albany, a state-run research center, uses a device called a transcranial magnetic stimulator to try to stimulate brain cells.

The hope is that the participant in turn will learn how to use those cells to prompt leg muscles to move.

An estimated 250,000 to 400,000 people nationwide live with some type of spinal cord injury, according to the National Spinal Cord Injury Statistical Center, a nonprofit organization in Birmingham, Ala., that cited figures collected by the National Institutes of Health.

The hope is that with training, people can relearn how to control reflexes needed to walk.

The study at Helen Hayes is open to people who have incomplete spinal cord injuries – which means they still have some ability to control their muscles.

Dennis Geyer fit the description and decided to join the study.

The Washingtonville, N.Y., resident was severely injured in a motorcycle crash nearly two years ago.

Through physical therapy, he was able to regain the ability to walk, but his leg muscles remain weak.

Three times a week for two months, Geyer met with Thompson at Helen Hayes Hospital to learn how to change muscle responses to a specific stimulus or to control brain-wave activity.

During one of those sessions earlier this month, he sat in a chair while electrodes were placed over his leg.

Thompson then took the transcranial magnetic stimulator, a device that looks like a long, hand-held hair dryer with a cup on the end, and placed it on his head.

The stimulator delivers a small magnetic charge to the area in the brain believed to stimulate leg muscles.

After the charge is delivered, Geyer is given visual feedback after nerve or brain stimulation or during brain-wave control trials, indicating whether the muscle response or brain-wave activity is changing in the correct direction.

The stimulator doesn’t hurt, and Geyer thinks the treatment is helping him gain more control over his leg muscles.

“This has helped improve my ability to control my walking,” he said.

Centrowitz is hoping the experiment helps her improve control in her legs.

She still can’t walk independently, but she thinks she has gained more control over her legs since she started participating in the experiment.

But she does hope the study and other research will some day enable her to walk again.

“Every time you hear about new research, it makes you think that maybe you won’t be in a wheelchair forever,” she said.

Helen Hayes Hospital is looking for people with spinal cord injuries to take part in a study of spinal reflex training. Participation requires three sessions per week for two to three months, followed by four to eight sessions over another two to three months. Each session will last approximately 90 minutes. Participants will be paid $15 per session.