Fundraiser hopes to raise money for those with spinal-cord injuries 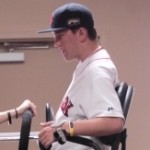 Hal Hargrove Jr. had a decision to make, one that would affect him and those around him for the rest of his life.

After a devastating car accident in July 2007 that left the 17-year-old Claremont High School graduate in a wheelchair, Hargrove could either while away in bitterness and self pity or be perfect – he chose the latter.

For Hargrove, now 19, being perfect has little to do with perfection.

“It’s about living the best life you can live,” Hargrove said. “It comes from that movie ‘Friday Night Lights’ when the coach, the Billy Bob Thorton character, told his football team that being perfect has nothing to do with the scoreboard.”

It’s the way Hargrove had always lived his life, and just because fate
had interceded with a life-changing blow – he would continue to Be Perfect.

In that same philosophy, Hargrove founded the Be Perfect Foundation, a nonprofit that helps spinal cord injury victims.

Hargrove’s accident happened only a month after he graduated from Claremont High, where he had lettered in football and baseball. Hargrove had planned to attend Cal State Long Beach in the fall.

During the summer, Hargrove worked for his father transporting
various pieces of equipment across the state by truck. Hargrove was taking medical supplies to a crew in Las Vegas and driving on the 15 Freeway that warm July morning.

Just outside Barstow, Hargrove saw a large piece of tire tread in his path and tried to avoid it. Veering to the right, he hit loose dirt and lost control.

The truck rolled four times. Hargrove was trapped in the crushed cab for 40 minutes before he was freed by the Jaws of Life.

“I was in shock, just running on adrenaline, but I already knew my legs couldn’t move,” he said.

Life Flight was called and airlifted Hargrove to Colton’s Arrowhead Regional Hospital with a broken neck and scapula, with the most damaging injury to his spinal cord.

Hargrove underwent an eight-hour surgery at Arrowhead and in mid-August was moved to Casa Colina.

Doctors gave Hargrove between 1 and 3 percent chance that he would ever walk again, but he doesn’t take that prognosis too seriously.

“Statistics don’t mean anything to me,” he said.

Five months after his accident, Hargrove learned of Project Walk, a nonprofit in Carlsbad dedicated to improving the quality of life for people with spinal-cord injuries through intense exercise, education, support and encouragement.

He started going three days a week and gained the catalyst for the Be Perfect Foundation.

“I met this guy there, Bryan O’Neil,” Hargrove said. “And at Christmas, I told him, ‘I’ll see you after the holidays’ and he said he couldn’t make it back.”

O’Neil said his treatment had run out.

“He told me that he had a family and had to put food on the table,” Hargrove said. “He said that he wanted to walk, but he’d already had to sell his car and his house.”

“It really put things into perspective for me,” he said. “I am so lucky, I have so much. I needed to give something back.”

Hargrove
went to his family and told them of his vision for Be Perfect and together they made that dream a reality.

Hargrove, still a dedicated athlete, works out five days a week. He believes he will walk again either through self-reliance or medical break through and he wants his body to be ready.

Hargrove’s strength of character, belief in self, committed friends and loving family has produced this strong-willed individual with a “never give-up” spirit.

“I’ve been given a gift, a second chance at life,” he said.

“The accident showed me what I had within me that I didn’t even know I had. It opened my eyes to all the things I have to be grateful for. It was tough at first to realize that I had lost some of my dreams, but now I know I have gained so many more.”

Fast and slow – How the spinal cord controls the speed...