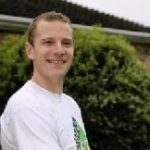 A SEVENOAKS man is tackling Snowdon for charity less than a year after being paralysed in an accident.

Andy Adamson, 27, of Chipstead Lane, said he was lying in hospital after a mountain biking accident in the French Alps in August last year, wondering if he would ever be able to get out, let alone get back to his previously sporty life.

Now he is preparing to climb Snowdon to raise money for the Back Up Trust, a charity which supports people after they have suffered spinal cord injuries.

Mr Adamson, who is now unable to use his legs, said: “One of the things I found out about in hospital was the Back Up Trust.

“I got involved with them, I did a bit of volunteering in their office and I went on a waterskiing course.

“It’s really inspired me to get out and about after the spinal cord injury.

“I used to live up in Scotland and used to like getting out on my mountain bike and out in the mountains and camping out in the great outdoors.

“This is a chance to really get out there and feel I’ve got back to life.”

There are 14 teams of 10 or more people taking part in the Snowdon Push, with one wheelchair user in each.

The teams will be taking to the Welsh mountain between July 3 and 5.

Mr Adamson said: “I don’t actually know any of the other team-members. All the teams are made up of volunteers.

“Civil engineers have been doing some strengthening on an old wheelchair. I’ve been swimming twice a week and pushing to build up my strength.

“I think I’ll be happy just to complete it on my first time.”

Mr Adamson, who grew up in Sevenoaks, is still volunteering with the Back Up Trust, which offers a range of services including wheelchair skills, mentoring and outdoor activity courses, and he is hoping to do a skiing course next year.

He said: “I think it’s really easy with this type of injury to sit around at home watching daytime TV, just becoming very housebound.”

To sponsor Andy, go to www.justgiving.com/andyadamson