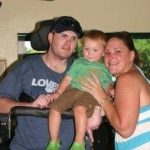 Standing watch at a post in Iraq, former Humble resident Anthony Thompson did not know that he and members of his crew were in trouble.

“During his second deployment to Iraq in 2007, he (Anthony) and others were injured when a suicide bomber drove up in a dump truck and detonated improvised explosive devices at the post,” Ivonne, his wife, said. “Two of the injured were able to stay in Iraq and six were carried back to stateside, including Anthony, who was the worst injured.”

Due to the incident, Anthony, who joined the U.S. Navy Corpsmen at 21 years old, suffered a severe traumatic brain injury, a spinal cord injury, a punctured right lung along with other scrapes and bruises. He was sent to the James A. Haley Veteran Hospital in Tampa, where he currently remains.

“Anthony is minimally conscious. He can open his eyes and he is aware of his surroundings, but he cannot yet communicate with me verbally,” Ivonne said. “We are trying to get approved for a 12-week trial program in New Jersey that could help him communicate.”

With the family getting ready to transition back into their normal lives, Ivonne began the process of looking for a home that will meet Anthony’s needs. Through a veteran liaison at the hospital, she was put in touch with Homes for Our Troops, a nonprofit organization that builds homes for wounded veterans. After filling out an application, they were approved.

“When I called the organization for an application, I was told that they heard of Anthony and were waiting for me to call,” Ivonne said. “This program is so wonderful because it helps wounded veterans like Anthony get a home, which takes the burden off of the family.”

The four-bedroom home will be built in the Water’s Edge subdivision near Summerwood. All rooms will be built with Anthony in mind so that he will be able to live comfortably.

Prior to graduating from Hargrave High School in Huffman, Anthony and his family lived in Humble where he attended middle school. He and his wife have a 22-month-old son, A.J.

“If he was able to communicate, I know he would say how honored he was to be getting this home,” Ivonne said.

Homes for Our Troops, established in 2004, is an organization that receives donated materials and labor to build homes for veterans who have severe multiple injuries.

“This is our way of showing our appreciation for those who put their lives on the line for us,” Carla Patton, an organizer for Homes for Our Troops, said. “To be accepted into our program, veterans must have multiple life-threatening injuries.”

Since its inception, it has built 42 homes with two of those homes in Texas. Currently there are four construction projects in the state – in Humble, Fort Worth, San Antonio and Idalau.