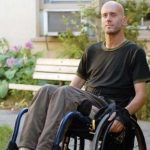 It’s quiet under the water. The roar of the rapids muted.

But Peter Chisholm’s heart raced as he fought to grab the loops of his spray skirt.

This time it was different. This was not like the thousands of times he’d rolled in his kayak while navigating a rushing river.

In less time than it takes to dip a paddle in the water, Peter was upside down, the river hurling him on a life-changing ride.

Before he could react, before he could start to roll back to the surface, Peter was rocked by something hidden beneath the white spray.

His paddle was gone, and he didn’t remember when he’d let it go.

White water swirling around him, disoriented from the hit to the head, he could only think of one option left: pull the spray skirt and make a wet exit from the boat.

But why was it so hard to reach and grab the loops?

“I broke my arms,” Peter thought, but dismissed the idea. That was impossible, he didn’t hit his arms and he couldn’t have broken both at the same time.

He got them and pulled, and expected gravity to pull his body out of the kayak and his life vest to pop him to the surface of the water.

But nothing happened. He was still bottom up, trapped in the boat under water.

Somehow, in the turbulent river, some rapid or drop partially flipped his boat, giving Peter a precious moment to take in a breath.

The ride wasn’t over yet.

Above the water, Ian Collings had watched Peter pass him upside down and thought nothing of it.

Paddling partners for nearly four years, the two had watched each other take their good and bad lines on the river so many times now Ian just pushed off and gave chase. Peter would roll up shortly.

The thud of boat hitting boat was the sound Peter was hoping the hear. It meant Ian was next to him now. Help had arrived.

He reached out and smacked Ian’s kayak, pulling himself onto his side, gulping another breath before the river took hold again.

The two rode another set of rapids, Ian paddling hard, concern for his friend growing, and Peter underwater, fighting to get out of his kayak.

“There’s something wrong here,” Ian thought as he reached a quiet stretch of the Seymour River.

Ahead of him, Peter’s kayak spun uncontrolled, the smooth, slick bottom facing the sky.

Ian jumped out of his boat and splashed towards it, tackling the kayak and kayaker around. He wrestled the two towards the shore, towards a calmer section of river where he held on to his friend.

Peter was in pain, but fully conscious and aware. He knew he’d been hurt, and that it was bad.

Above the river, two other kayakers, Kyle Dunn and James Mole, had watched the whole incident.

They’d called 911 when Peter didn’t surface, and now were on their way down to the river’s edge to help.

Peter had floated upside down in the kayak for nearly 400 metres through a series of rapids some locals call Final Exam because of its technical difficulty. He’d been underwater fighting to escape his kayak for air for just under a minute with what doctors would later tell him was a broken neck.

While he lay in Ian’s arms, Peter, a youth outreach worker at the Ambleside Youth Centre, could only think of one thing.

It wasn’t regret. Or fear, or anger.

An organizer and leader for an annual paddling trip for West Vancouver alternative students to Bowron Lake, Peter wondered if the trip would still go ahead this year.

“I’m not going to be able to go on the canoe trip. This isn’t a good thing,” Peter thought.

At the Ambleside Youth Centre, Peter Chisholm almost always kept his mountain bike parked next to his desk, which displays several photos of his river adventures.

Since his injury, the youth centre has been quieter without the “funny bald guy” as some of the kids call him.

His desk is still there, and the photos too. But the bike and, more importantly, Peter are missing. His chair has been empty since April.

A fixture at the youth centre, Peter has counselled and supported numerous young people over the years.

“He’s seen me grow up; he’s seen me through various problems,” says Conor McLaughlin, 19. “He’s always there looking out for you.”

“It’s lacking his lame jokes … Peter would always liven it up a bit,” Conor says.

It’s July 29, and a heat wave is baking Greater Vancouver.

Looking back on the day he broke his neck, Peter is thankful that it wasn’t worse. After the surgery to fuse his C6 and C7 vertebrae at the base of his neck, he’s bound to a wheelchair but seeing good recovery of motion to his neck and arms. His hands are still a bit sluggish.

Even better, the Bowron Lake trip still took place despite his absence.

“Initially I was mostly concerned about the canoe trip and what was going to happen,” Peter recalls. “Funny the things you think about when things are going on around you.”

Wheeling down the hallways at GF Strong Rehabilitation Centre, he pops a wheelie at every opportunity. Knowing how the do them properly he says will give him greater mobility jumping small obstacles when he gets discharged from the hospital.

“You know, there’s situations that happen in our lives that we don’t like and really the only choice we have is ‘how are we going to deal with it?’” Peter says.

Nearly three months after his injury, Peter is focused on his physical recovery while staying positive.

A person who preferred a weekend outdoors before the crowded social scene around Vancouver, he’s looking thin and gaunt, far from the lean athlete who excelled on the river and chased the powder on telemark skis.

There’s a restlessness in his eyes, but the daily regiment of courses keep him busy.

Occupational therapy covers life in and around an adapted home while courses like hand class bring together a group of patients who jointly tackle everyday tasks like opening pill bottles and writing.

Peter earlier had a Blackberry to stay in contact with the outside world. But he’s since switched to an iPhone, preferring the big touch screen over buttons.

“What I like about this is it doesn’t take a lot of pressure to manipulate, the targets are pretty big,” he says. “So using some adaptive aids, this is a good example.”

The injury has been life changing, not life ending, Peter says.

He can still do many of the same things as before, just with different techniques or strategies — things he’s learning at GF Strong.

But when he’s alone, he admits to thinking darker thoughts.

Life will be different outside of the bubble of the hospital, where everything is built to be wheelchair accessible.

He’s also without a home currently, having given up his basement suite in North Vancouver because the entrance was only accessible by stairs. With a discharge date in mid-September, Peter will likely move to transitional housing while looking for a new place to live.

“When I get by myself, those are the times I feel bad or I’ll sink into more of a depressive thinking pattern,” Peter says. “Then somebody will come in to visit me and immediately it lightens my mood and I start to get more optimistic about the future.”

There are family and friends visiting, and the young people he works with at the Ambleside Youth Centre. They come to check on his well-being and his recovery, and leave messages on cards tacked to the wall. A poster sits in the corner with well wishes from the kids, and one of them has glued a photo of Peter’s mug over the body of RoboCop.

Peter always looks forward to those conversations, and while his paddling friends who visit are often interested in his recovery, Peter is keen to talk about the river and kayaking.

“I like talking about it actually … I’m always curious. I recognize some of the rivers they’re on – it actually makes me feel good that they’re paddling …

“There’s lots to be optimistic about for the future, and at the same time, there’s some difficult challenges,” Peter says.

He might not be able to telemark ski anymore, but there’s still cross country skiing that he’d like to try out. He likely won’t be kayaking the same white water rivers as before, but flat water on oceans and lakes is still possible.

Peter doesn’t plan on slowing down, but the trajectory of his life is changing.

He wants to recover, find a wheelchair-accessible home, and get back to work at the youth centre.

But he’s going to need help in new and different parts of his life moving forward.

“It’s just my reality, and I guess it’s maybe everybody’s reality,” he says. “We don’t realize how dependent we are on each other for different reasons, and when you suffer an injury like mine you depend on people for different things.”

The challenge, Peter believes, partly lies in his work helping youth. He’s not used to being on the receiving end.

“But I think I’m learning that we all need help; we all have to accept it with good grace I think is the idea,” he says.

A gratifying moment came when the youth he helps banded together to help him. Just days after his injury, they started brainstorming fundraising ideas, knowing the tough road ahead for Peter.

Although the sums haven’t been large, Peter’s touched.

“It doesn’t surprise me,” Peter says. “I know we’ve built up some good relationships and they’re good kids, I’m not surprised at all and it’s gratifying to know that those kids would take time out of their own lives and help me.”

His life has changed, and there are those out there — family and friends — who want to offer a hand. He’s choosing to accept that now.

It’s a choice he’s making to move on, past the injury and toward a life he wants to live.

“I think one of the things I would say to anyone, including the kids, is bad things happen to you in your life and you still have choices … Don’t give up. You can’t give up.”

Peter’s advice to anyone, whether they’re injured or not, is to keep working hard and keep setting goals.

“I want to have fun in my life, and I will. It’s just a matter of adjusting to these new circumstances,” he says.

“A lot of those kids (at the youth centre) have gone through difficult times and when they were going through those difficult times I would tell them that. I would say, ‘The only choice you don’t have is to quit.’”

Peter pauses for a moment, hands resting on the wheels of his chair. He cracks a small smile and chuckles.

“How did I know those words were going to come back and haunt me?”

The North Shore paddling community has also banded together to help Peter. On Aug. 13, they’re holding a comedy night at Lafflines in New Westminster. For more information on the Paddlers for Peter event, or to buy tickets, call Paula Jamieson at 778-995-1258.