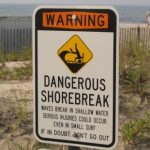 At issue, beaches with sharp drop offs may be causing neck and spine injuries for body surfers and surfers here as a result of sand replenishment by the U.S. Army Corps of Engineers. The Corps have been replenishing the city’s beaches since October 1999. Those who body surf are affected the most by running into a wall of sand at the shoreline.

Chad DeSatnick, a former lifeguard who shattered two vertebrae in his neck eight years ago surfing at Poverty Beach, told City Council August 4 that the beach patrol and firefighters answered three 9-1-1 emergency calls on the city’s beaches alone on August 3. He has contended that the number of C-Spine injuries increased when beach replenishment began in Cape May.

DeSatnick was surfing at Poverty Beach when he was thrown into about six inches of water, headfirst backwards, shattering the C6 and C7 vertebrae in his neck. He said he was fortunate not to have received any spinal cord damage.

DeSatnick, quoting figures from Cape May Fire Chief Jerry Inderwies Jr. said the fire department has answered 20 C-Spine 9-1-1 calls from June 26 to August 3.
“In 2008, that number was 12,” said DeSatnick, for the same time period. “We still have three weeks left in the summer.”

DeSatnick said there are 31 beach entrances in Cape May and all were supposed to have signs warning of a “dangerous shore break.” He said seven entrances had no warning signs and he felt each entrance should have a warning sign.

DeSatnick said most of the C-Spine calls were classed by the fire department as “precautionary.” He said the beach patrol and fire department have done a phenomenal job of responding and transporting the patients.

“It is kind of scary that calls for C-Spine outnumber those for cardiac or other first aid calls,” said DeSatnick. “Is the city responsible for creating a natural grade when the sand is pumped into the beaches of Cape May whether it is with trucks or dredging?

Mahaney said the responsibility fell with the U.S. Army Corp of Engineers and the state Department of Environmental Protection.

DeSatnick asked why some towns created natural grade on their beaches. Mahaney said some towns are doing the work without adequate approval.

DeSatnick partnered with the beach patrol and fire department last spring to visit Cape May Elementary School and Our Lady Star of the Sea School to create a beach safety awareness program for students. The program may be extended to Lower Township Schools next year.

“Here is the issue, people that are getting injured in Cape May do not live here, they are people that come to town for the day, the week or the weekend,” he said.

Mahaney said he agreed the city needed to do something more immediate to warn visitors of the shore break danger.

DeSatnick said he was fortunate he was not paralyzed from his C-Spine injuries and he wanted to “make a difference for other people.” He said last year there was supposed to be a Senate inquiry from Sen. Frank Lautenberg but he never heard a follow up.

A woman broke a femur bone from the shore break here which was not a C-Spine injury said DeSatnick.

“I just want you guys to step up and do something, the signs were a step in the right direction but more needs to be done,” he said.

A person who suffered a spinal cord injury on a Cape May beach two years ago will attend council’s August 18 meeting, said DeSatnick.

Mahaney said Lautenberg was in touch with the Army Corps of Engineers, which was trying to alter its engineering designs to find a way to create a gentle sloping beach here. The mayor said he discussed the problem last week with the Army Corps when they came to the city to examine erosion at Cove Beach.
The size of grains of sand used in beach renourishment and where the sand comes from are factors, he said.

City Manager Bruce MacLeod said according to beach management regulations, the city cannot push sand toward the ocean. He said the original intent of the beach replenishment program was to provide protection to property, so the sand has a steeper slope than natural beaches. He said Cove Beach, which is natural, has no slope and is basically flat.

“Unfortunately, the needs of beach replenishment run in conflict with a nice, even slope to the beach,” said MacLeod.

He said several injuries have been reported attributable to the slope of the beach where the bathers are thrust by the waves into the beach.

Deputy Mayor Niels Favre suggested the city produce a brochure on beach safety in general, to be given out with each beach tag sold.

DeSatnick suggested a signboard at beach entrances with information on beach tags, rip currents, shore breaks and kayaking. He suggested wood shop students at Lower Cape May Regional High School could build the signs and local businesses underwrite the cost.

Mahaney said he supported the idea of a comprehensive signs at beach entrances.