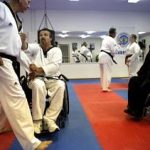 In tae kwon do, age doesn’t factor into where you rank in the classroom. What you’ve achieved does.

Danny Hicks has a front-row position at the Auvenshine School of Tae Kwon Do in Auburn. His hard work over the past decade has made him one of the highest-ranking students in the school: a first-degree black belt.

And he got there in a manner few, if any, have: from the seat of a wheelchair.

Hicks, 37, of Springfield suffered a spinal cord injury when a vehicle he was traveling in went off the road and into a grove of pine trees in 1990, just weeks after he graduated from Lanphier High School. Factors in the accident included alcohol, high speed and the lack of safety belts. One passenger died. Hicks spent a month in a coma and 4 1/2 months at Memorial Medical Center undergoing rehabilitation.

His injury left him paralyzed from the chest down and with short-term memory loss. The day of the accident was the worst day of his life, he said, and the days that followed were challenging, embarrassing and scary.

But Hicks has never been the type of guy who lets much get in the way of what interests him, and that philosophy didn’t change.

Today, he’s a full-time employee for Southern Illinois University School of Medicine’s Think First program — an injury prevention program funded by the Illinois Department of Transportation that teaches students to make safe decisions; a member of the Land of Lincoln Barbershop Chorus; host of his own public-access cable television show; a speaker for drunk-driving Victim Impact Panels; an Elvis Presley impersonator and a shepherd for his church, East Keys Baptist.

“I like to think of myself as someone that a person with a disability can look up to,” he said. “Lots of people shut themselves up in their houses and are afraid to do anything with their lives. That’s not the case for me — I’m living proof of it.”

Every time he attends class at the Auvenshine school on the east side of Auburn, Hicks brings along two apples for his teachers: a yellow one for schoolmaster Bill Auvenshine and a red one for Auvenshine’s wife and fellow schoolmaster, Patty.

“He’s the teacher’s pet,” said Patty, a schoolteacher in Kincaid and a fourth-degree black belt.
Hicks also has proved to be a shining example and inspiration for the other students who practice with him. Bill Auvenshine, a sixth-degree black belt, believes Hicks is one of only a few students — and the only one that he knows of — to achieve black belt status from a wheelchair.

Auvenshine also is wheelchair-bound. A paraplegic, he suffered his injury in 1995 after an old pickup truck he was driving hit a patch of black ice, flipped twice, struck a telephone pole and landed in a frozen ditch. His background as a martial artist and outdoor enthusiast served him well during his rehabilitation process, and he soon had adjusted to his new way of life.

The Auvenshines had planned to open their own tae kwon do school before Bill’s accident. Afterward, he wasn’t sure they should proceed.

“My first thought was, ‘Well, that’s out the window,’ ” Bill said. “It was easy in the early days to feel helpless.”

Patty, however, wasn’t going to let his pity party last for long.

“She said, ‘I know if you open a school and you fail, you’ll move on.’ She knew I couldn’t play the ‘what if?’ game forever.”

With the help of a grant from the Illinois Department of Human Services, the Auvenshines opened their school in Auburn. The financial boost, along with strong support from the community, has kept the couple in the black the entire 12 years the school has existed. Last year, they opened a second school in Taylorville.

Hicks learned about the Auvenshines’ school in 1997 while speaking at Auburn High School as part of his then part-time role with the Think First program. The Auvenshines’ son, Harold, introduced himself to Danny after the presentation and told him about his father.

“When he said his dad had opened a school and he’s in a wheelchair, I thought, ‘You gotta be kidding me,’ ” Hicks said.

A year or so later, Hicks was invited by another friend in a wheelchair to join him and his rugby teammates — all quadriplegics — in a special tae kwon do class at the Auvenshines’ school. It was then that Hicks saw what Auvenshine was able to achieve from his wheelchair.

Soon after forming the wheelchair-only class, Auvenshine realized he was doing the members a disservice. Because he focuses so much on self-defense techniques, he feared they weren’t learning how to protect themselves from the people most likely to approach them: able-bodied people.

So he told them he’d never charge them a fee for taking classes, a policy he still offers today for any disabled student. But they had to integrate with the other students.

A month later, only Hicks remained on board.

Tae kwon do relies heavily on kicking. When a participant is paralyzed from the chest down, some improvisations are necessary.

For Hicks to move up the ranks in the sport, Auvenshine created modifications or substitutions — often a hand strike in place of a kick. Hicks also was expected to learn the same rules and credos as other students, and learned each group of forms (a series of movements) required for each colored belt.

“I made it very hard for him,” Auvenshine said. “I did not make it easy. But he didn’t give up. He wouldn’t give up.”

Hicks suffers from short-term memory loss. For the first three months he was a student of Auvenshine’s, he required written directions to ensure he made it back home. He’s constantly posting reminders on sticky notes and has a calendar in nearly every room of his house to keep him on track. Memorizing the tae kwon do forms — upward of 400 different movements — proved to be a challenge.

The Auvenshines made movies of the forms, and Danny took them home and watched them repeatedly.

“He knew them all,” Bill Auvenshine said. “He didn’t just memorize the wheelchair moves I created. He also learned the forms for able-bodied students. That was important to him.”

Keven Krone of Springfield, who began taking classes with his son several years ago and is now a fourth-degree black belt and substitute instructor at the school, learned Hicks’ adapted moves so the two could spar, further aiding Hicks’ training.

It took five years for Hicks to move from a white belt to black belt, a feat that led him to be inducted into the USA Martial Arts Hall of Fame three years ago. He’s owner of at least 15 five-foot-tall trophies and nearly 50 smaller ones, some of which he’s loaned to the Auvenshines to display at their Taylorville school.

Though he’s no longer actively training, which requires two nights of classes per week, he still attends classes when he can and often travels with the school to judge competitions or help emcee.

When he does compete, he does so against other black belts. Auvenshine often will loan the competitor his wheelchair, though Hicks also has the option to spar a competitor who is standing. It’s not something he prefers to do, however.

“I enjoyed it, but I was getting kicked in the head more than anything,” he said, laughing. “It’s more entertaining to have them fight in a chair.”

At a tournament this summer, Auvenshine said he watched as Hicks knocked a high-ranking black belt and the wheelchair he was in to the ground with two consecutive punches. The whole room erupted.

“I was laughing so hard, I almost fell out of my chair I was sitting in,” Auvenshine said.

‘Our life is limitless’

JoAnna Magelitz of Virden has been taking her two oldest sons to Auvenshine’s School of Tae Kwon Do twice a week, year-round, for six years. The sport appeals to her family because of the respect and self-discipline it creates for students, especially young people.

Having Hicks practice alongside her sons, she said, is “truly inspiring.”

“It shows them there’s plenty of obstacles to overcome — and that there’s always somebody facing a more difficult situation than you are,” she said.

Hicks said he enjoys seeing how tae kwon do changes a young person for the better, just as it did for him.

Through his job with SIU, Hicks has had the chance to speak to more than 100,000 teenagers about the dangers of drinking and driving. He once told Auvenshine that if he’s helped only one of those thousands of young people, it’s been worth it. Auvenshine said he’s pretty sure Hicks has affected more than just one.

“That’s the great thing — that I’m still able to make a difference,” Hicks said. “Not only in my job, but in this activity. Our life is limitless. Whatever you want to do is up to you. The determination is all up to you.”

Views through the eyes and mind of artist Dale Tabor