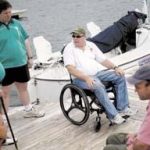 Any sailor will tell you that being out on the water can be an escape from your problems ashore.

“It’s just a way to get out of the wheelchair,” said the 48-year-old Portsmouth resident, who is paralyzed from the breastbone down.

“And,” he said, his eyes brightening, “the racing is kind of exhilarating.”

Leatherbee has been disabled for 25 years. Despite his challenges with mobility, Leatherbee is independent, active, quietly confident and committed to helping others with spinal cord injuries.

He’s been unwilling to let roadblocks stand in his way. “I just decided I’m going to move on and try to be as strong as I can,” he said.

For example, he couldn’t find a contractor willing to build him a platform to help him get into his raised, outdoor Jacuzzi. They were all worried about the liability, he said. So Leatherbee built one himself.

He installed hand controls in his car so he could drive. He calls ahead if he’s going to an unfamiliar restaurant to see if it’s handicapped accessible.

He loves to exercise, either by using a special leg machine that mimics walking or hand-cycling a few times a week on the East Bay Bike Path. He can go 30 miles without breaking a sweat.

And after a few years sailing, Leatherbee is now commodore of Shake-A-Leg’s adaptive-sailing club, which launches races Wednesday evenings off Fort Adams State Park in Newport.

“He’s really sort of taken to sailing and he got out there and made himself into a real competitor,” said Tim Flynn, Shake-A-Leg’s executive director. “He has seen the benefit sailing has brought to him and he has decided he wants to be part of bringing that to other people. He’s a good role model and mentor.”

A motorcycle accident in 1981, when Leatherbee was 23, left him with what is called a T-4 complete injury, an injury to the Thoracic Vertebrae, around his chest bone. Leatherbee has no feeling from there down, although he can move his arms. (As fit as Leatherbee is, he jokingly says that he looks like he has a beer gut since his stomach muscles don’t work.)

Leatherbee has worked as an engineer and a car mechanic, owning Quik Tune and Lube, in North Smithfield, for 11 years. He’s also worked for a company that builds exercise equipment for paraplegics.

Now, he owns Temperature Alert Monitors, which sells gauges that allow people to keep track of the temperature of their homes from afar. He credits his father, William B. Leatherbee Jr., also of Portsmouth, for being his biggest supporter.

Leatherbee doesn’t talk much about the accident that left him paralyzed. Instead, he would rather focus on his work supporting paralysis research and his participation in the CareCure Community, which bills itself as the largest interactive Web site dedicated to spinal cord injuries.

Young’s center sponsors CareCure, and Leatherbee is a volunteer moderator for the site’s online forums, where the disabled discuss everything from new mobility equipment to relationships and motivational song lyrics. He said the site is particularly helpful for people with new injuries who use the site to commiserate with the veterans.

“The main question is, ‘When is a cure going to be there?'” Leatherbee said.

The Christopher Reeve Foundation estimates that 400,000 Americans have spinal cord injuries, with 11,000 new injuries occurring annually. Motor vehicle accidents account for nearly half of those injuries.

Leatherbee is passionate about efforts to find a cure for spinal cord injuries. He said he’s frustrated with opposition to stem-cell research. He supports passage of the Christopher Reeve Paralysis Act, which advocates for collaborative research into cures, treatment and improving quality of life for those living with paralysis.

“In the meantime,” he said, “people are just sitting in their wheelchairs. The government just isn’t helping us out that much. I honestly believe because of the government, I will spend more time in this wheelchair.”

Leatherbee’s advocacy is making an impact, at least on the local level.

“He’s just a wonderful fellow,” Flynn said. “He really sort of embodies the Corinthian spirit. He’s a real sincere, down-to-earth guy, a pleasure to be around, and he’s good for the program.”

Leatherbee, though, is modest about his mentoring role.

“It feels good to be able to help people and make their lives easier,” he said. “That’s why things are better today than they were 20 years ago, because people before me worked to get things changed. Still, it’s frustrating; the prognosis is still the same. You will be in a wheelchair the rest of your life. I want to see that prognosis change.”