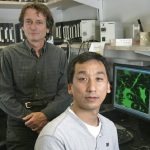 Any chance of recovery from a spinal-cord injury, however small, depends on swift treatment. Without that, damaged nerve cells wither, some die and the body becomes paralyzed.

But perhaps the paralysis isn’t permanent. Neuroscientists at the University of California San Diego have for the first time successfully regrown axons – fibers that connect nerve cells and conduct their essential communications – in the damaged spinal cords of rats with untreated injuries that are six weeks to more than a year old.

“This work may eventually make it possible to help people with longtime, established spinal-cord injuries,” said Dr. Mark Tuszynski, a UCSD professor of neurosciences and co-author of a new paper describing the research in the journal Neuron.

If that number improves, it will be due in no small part to the work of local researchers such as Tuszynski who have helped make San Diego a global leader in neuroscience.

“San Diego has great neuroscientists working in great institutions,” said Dr. Michael Goldberg, president of the Society for Neuroscience. The group’s annual conference, which attracts more than 30,000 scientists, will be in San Diego next year.

“San Diego has a heavy concentration of people doing both experimental and theoretical work, from molecule to the mind. There are only a few places in its league – cities like New York with Columbia University, Boston with the Massachusetts Institute of Technology and Baltimore with Johns Hopkins University,” he Goldberg said.

San Diego is home to five institutions devoted partly or entirely to neuroscience: UCSD, the Salk Institute for Biological Studies, the Burnham Institute for Medical Research, The Scripps Research Institute and The Neurosciences Institute.

Those facilities, along with biotechnology companies, foundations and specialized centers in the region, create a scientific and intellectual force far greater than its parts, one that significantly defines and drives the quest to better understand the human brain.

In recent years, San Diego neuroscientists have been in the forefront of research investigating the causes and treatments for autism; neurodegenerative diseases such as Alzheimer’s and Huntington’s; and how the brain grows, adapts and ages.

In the most recent rankings by Science Watch, an organization that measures the scientific impact of research published worldwide, three local institutions were ranked in the top 20 for neuroscience and behavior: Salk was first, Scripps 13th and UCSD 18th.

The reasons for success are myriad and as intertwined as neurons themselves. Most obvious is the geographical proximity of the major institutions – all five are in La Jolla. Such closeness engenders collaboration.

“There are more seminars and meetings within one mile of my building than I can possibly take advantage of,” said Elisabeth Walcott, who studies how neurons function in networks at The Neurosciences Institute.

And sharing has become critical.

“The science is so big now,” said Dr. Stuart A. Lipton, who previously worked at Harvard University and is now director of Burnham’s Del E. Webb Neuroscience, Aging and Stem Cell Research Center. “No one person or institution can have all of the toys, the big instruments, the necessary technologies and techniques.”

It helps, of course, if the sharing is done willingly, even eagerly. That’s not the case everywhere.

“Most institutions are set up so that people mostly talk within their department or maybe even just down the hall. Here, the conversation extends across entire schools and institutions, public and private,” said Lawrence Goldstein, a professor of cellular and molecular medicine at UCSD whose research investigates how information and material is transported in the brain and how dysfunction plays a role in neurodegenerative diseases.

“These interactions involve people who are not just neuroscientists, but engineers, chemists, computer scientists and more. . . . Much of the scientific world is organized around silos. We’re built around bridges.”

UCSD, Burnham, Salk and Scripps are in the third year of a five-year, federally sponsored partnership to promote interdisciplinary collaboration. One result has been the San Diego Consortium for Regenerative Medicine, which last year proposed erecting a $115 million, first-of-its-kind stem cell research center near the Torrey Pines Gliderport in La Jolla.

And last month, UCSD scientists announced the creation of the $10 million Whole Brain Catalog, envisioned as an open-source, online clearinghouse of data on the mouse brain – a touchstone of laboratory neuroscience.

The scientists who laid the foundation for this kind of collaboration include researchers Francis Crick, George Palade, Renato Dulbecco and Roger Guillemin – all Nobel laureates – and lesser-known pioneers such as Robert Livingston, who established UCSD’s Neurosciences Department in the late 1960s, a first among U.S. universities and medical schools.

“The emphasis has always been on discovery and being productive, not on empire-building,” said Fred Gage, a Salk researcher ranked by Science Watch as the second-most-cited neuroscientist in the country.

Tuszynski said part of UCSD’s success is that scientists have access to a medical school.

“The mission and philosophy here is one that specifically encourages the translation of medical science from the bench to the bed and back again,” said Tuszynski, who is also a neurologist in the Veterans Affairs San Diego Health System.

At The Neurosciences Institute, research fellows grapple with the more abstract challenges of the human brain.

Weimin Zheng is an associate fellow in experimental neurobiology who studies how the human brain adapts to individual experience. Zheng came to The Neurosciences Institute in 2001 from Stanford University Medical School, drawn by the opportunity to pursue pure research “without many distractions.”

“We have true freedom of scientific exploration,” he said.

The highly ranked productivity of the region’s schools and graduate programs also provides an abundant source of young scientists with new questions and ideas.

The National Research Council of the National Academy of Sciences recently ranked UCSD’s neuroscience graduate program first in the country.

But Floyd Bloom, a veteran neuroscientist and professor emeritus at Scripps, said older brains are venerated here, too.

“It is very hard to recruit senior neuroscientists from San Diego to other locations because people have success here and want to stay,” Bloom said.

Niraj Desai, a neurophysicist at The Neurosciences Institute, agreed: “The concentration of talent and resources here is unusual. It’s remarkable how many neuroscientists either work in San Diego now or have passed through here at some point.”

History: Established in 1924 as Scripps Metabolic Clinic; modern incorporation as Scripps Clinic and Research Foundation in 1946. Second facility opened in Florida in 2005.

Research areas: Neurodegenerative diseases, including Alzheimer’s, ALS, Huntington’s and Parkinson’s, as well as clinical treatment of those disorders; stroke specialists at medical centers in Hillcrest and La Jolla; the region’s largest headache center and only epilepsy-monitoring center, as well as the Autism Center of Excellence.

Research areas: Nine labs study how the human brain is created, grows and organizes into an intricate, functionally active network that controls perception, behavior and memory. Development of therapeutic interventions for neurological conditions such as Alzheimer’s and Parkinson’s disease, and to treat stroke, addiction and schizophrenia.