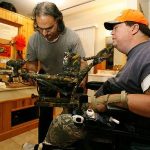 There is “no reason” James Cap, a quadriplegic who is physically unable to hold a gun or pull a trigger, should be denied a firearms ID card — a requirement for the purchase of any gun in New Jersey, a judge in Somerville said today.

“I hope you enjoy the use of your firearm,” Superior Court Judge John Pursel said before signing an order that will allow Cap to get a permit as long as any guns he buys are stored in a safe and only qualified people assist him with the weapons.

When he buys a gun, Cap will be able to shoot with the help of a friend, who can put his firearm in a special wheelchair mount. A mechanical device will allow him to aim and fire with breaths through a tube.

“You aim it right, left or down and take the shot,” explained Cap, saying it is a simple and safe device.

Cap, a 46-year-old Manville resident who was paralyzed by an injury suffered during a high school football game three decades ago, is an avid hunter who had been denied the ID card by a local police chief.

It took some 2 1/2 years, thousands of dollars and the calls of gun-rights advocates for the man to get a firearm permit. He even had his attorney, Edward Kopelson, file a lawsuit against Manville and borough police chief, Mark Peltack, who rejected his
application in 2008.

The judge’s ruling had Cap, sitting in his wheelchair in the back of a courtroom, thinking back to the last time he went hunting with a gun.

It was 1979 and his high school football game was postponed, so he headed into the woods of Hillsborough with a shotgun in hand. That Saturday, he took a rabbit and a pheasant home.

“When I was younger, we always went hunting, fishing,” Cap said. “Our whole family was like that.”

But the next day, that outdoorsman persona faded into the recesses of his memory. Cap suffered a devastating spinal cord injury, breaking his neck during the rescheduled football game. He hasn’t walked since.

Three decades later, Cap is going to be able to hunt with a shotgun again. Pursel, the judge, signed an order agreed to by Somerset County Assistant Prosecutor James C. Lankford, who became involved when municipal legal venues were exhausted.
It’s being hailed a victory for gun rights by the National Rifle Association, which had condemned Peltack’s initial denial.

“I think it’s a victory for common sense, at the very least,” said Darren LaSorte, the manager of hunting policy for the NRA’s lobbying arm, who added he’s still offended that Cap was denied his right to a gun at all.

Cap first applied for a firearms ID card on May 3, 2007, after seeing over the Internet how other disabled people had successfully used guns with the aid of wheelchair mounts and “sip-and-puff” devices, which some quadriplegics use to move their wheelchairs and perform other tasks.

Kopelson, who is also a quadriplegic, said police tried to thwart his client’s application from the start. He said department officials refused to review the materials describing the sip-and-puff device and denied Cap the permit on Dec. 31, 2008, telling him it was because he couldn’t control, load or unload a firearm himself.

Borough attorney Francis Linnus said the chief needed to turn down Cap because those safety issues could only be resolved by a judge.

Under New Jersey law, a police chief may not give a firearms ID card to anyone with a physical defect or disease that makes it unsafe for the person to handle guns. The chief may also deny an application if approving it “would not be in the interest of public health, safety or welfare.”

But the judge, Linnus said, was able to address those issues by attaching specific safety requirements to Cap’s permit.

Peltack, the borough chief, wouldn’t comment on the stipulations or his original decision, citing the lawsuit, but said he had read the order and was willing to give Cap a permit.

“We’re happy for him and we certainly will abide by it,” Peltack said.

Because of the judge’s order, the civil rights lawsuit was dismissed but the door was still left open if Cap decides to file again. Given that he’s spent $8,750 — between application fees and legal costs — Cap said he wouldn’t rule it out.

“I’m happy to have it,” he said of the permit. “I just wish I would have gotten my money back. That would have been fair.”

He’ll start looking for a gun this week and hopes to land a deer when shotgun season starts in December. He’s been out hunting with a crossbow and said the excitement of his beloved sport is returning.

“I didn’t think I had any feelings toward it, but my heart starts pumping again,” he said. “Even if I don’t get anything, it’s a lot of fun.”