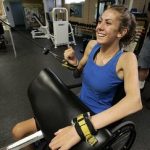 Therese Riedel is battling back from a spinal cord injury she suffered in September 2008.

SAN DIEGO – Growing up in La Mesa and playing basketball at Grossmont High, Therese Riedel spent as much time as she could on San Diego’s beaches.

She even saved up a handful of paychecks from her first job to buy a custom surfboard with a basketball court and her jersey number painted on it.

So when she transferred after a year of playing college basketball at Idaho to Vanguard University in Costa Mesa in the fall of 2008, Riedel felt right at home.

Riedel was at the beach almost daily, including Sept. 20 of that year for a bonding trip with her Lions coaches and teammates.

As she had done hundreds of times, Riedel ran into the water and dived into the face of a wave. Her head, though, collided violently against something in front of her.

“Immediately, I knew,” recalled Riedel, 20. “My body just melted. I knew I was paralyzed.”

Neil Riedel proudly shares a video on his iPhone of the youngest of his eight children. It shows Therese, lying at an incline on a resistance machine, bending her own knees in a recent therapy session.

Therese isn’t yet ready to take credit for it, explaining how the jumbled nerves in her lower extremities contribute to motion that is often out of her control.

But Therese is willing to acknowledge the progress she has made since the crash into a sandbar that resulted in the fracture of her C5 vertebra and the subsequent surgery that fused three together in all and left her struggling to simply lift her head. And the support she’s received from the local basketball community, including the SDSU and USD women’s teams.

“I’ve come from nothing, literally,” Therese said. “When I broke my neck, I couldn’t move. I couldn’t scratch my face. I couldn’t reach for a sip of water.

“And now, I slowly and progressively reteach myself. Just like in high school, you have to repeat things 100 times until you get it right. That’s what you do. Your muscles can’t do it? You try anyway.”

In the months after her surgery, the athlete in Therese needed a game plan. What are the steps, she would ask, to walking again? Doctors, nurses and therapists then didn’t have a concrete answer.

“I realized it didn’t have anything to do with them anyway,” Riedel said, knowing her progress was ultimately in her own hands.

In June, Therese first visited the Carlsbad office of Project Walk. Started 10 years ago, Project Walk improves the quality of life of people with spinal cord injuries through intense exercise-based recovery programs as well as education, support and encouragement, according to its Web site.

The therapy Therese has received there has allowed her to progressively gain the ability to hold herself up, move her arms and even trade in her motorized wheelchair for a manual one.

“The energy and the vibe is so positive,” Therese said. “They give me the tools to attain my goals.”

But it comes with a hefty price tag of about $100 per hour, Therese said. And the Riedel family insurance doesn’t cover a cent.

Asking for money “is the last thing we would ever do because we are very resourceful,” said Becky Riedel, Therese’s mom.

“And stubborn, and independent,” Neil added. “But I realized that, well,” he said, his voice unable to hide the emotion, “It’s for her. We knew we had to.”

“There’s times when we’re all just a basketball community,” Burns said. ”She’s one of ours. If we can get a couple thousand people to the game, and half of them can help out, a little bit will go a long way.”

The SDSU and USD coaches and players already had spent time visiting Riedel in the hospital and as she rehabilitated, which Riedel said inspired her.

“It has really touched me,” said Riedel, who was recruited by both schools. “It has shown me the family that comes from being an athlete. When you have that team support, there is nothing like it.”

Riedel wants to go back to Vanguard and complete her degree in kinesiology. She wants to pursue a career as a coach.

She already has returned to the beach, and would love to put that surfboard of hers in the water again.

But most of all, she wants to walk. And the faith she has fuels her.

“I remind myself why I am here and what I need to do,” Therese said. “When I start thinking, ‘Oh man, this is hard,’ it’s supposed to be. It’s teaching me something. And each day I get stronger and stronger, mentally and physically. God’s going to take care of things.”