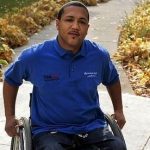 Wilberto “Tony” Rivera knows what it’s like to have life turned upside down in a matter of seconds.

One minute, he said, he was dealing drugs at age 23 on Indianapolis’ Westside. The next minute, he was shot in the back. He ended up paralyzed below the chest.

Now 36, Rivera is determined to keep Indiana youths from taking the same risks he did. From his wheelchair, he teaches life’s hard lessons to young people in schools, colleges and prisons as part of the ThinkFirst program at Methodist Hospital.

“I’m trying to get kids to think first before they act, listen to themselves and know what’s wrong,” Rivera said.

Rivera said he speaks 30 to 40 times a year to young people ages 14-25 in hopes they will make better decisions and consider the potential consequences of their actions.

Rivera addresses many of the causes of these injuries, such as football, skateboarding and riding bikes, as well as gang violence, drug dealing and difficult relationships. Rivera says he was shot by a man upset that Rivera was seeing a woman with whom he had been involved.

Rivera, an IUPUI freshman majoring in exercise science, also tells youths about the 2008 suicide of his 16-year-old son, Alberto, a Warren Central High School student depressed about several things, including the death of his infant son.

“It’s given me more passion when I talk to the kids,” Rivera said. “I tell them, ‘Your parents are your best friends; don’t lose communication with them.’ ”

Stem-cell research: “It’s where most of my hope lies”