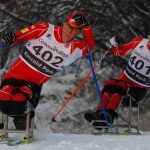 Chris Klebl was paralyzed in a snowboarding accident in Australia.

Sean Halsted’s injury occurred when he fell 40 feet descending from a helicopter on a fast rope during Air Force combat training.

An improvised explosive device took both of Andy Soule’s legs during the war in Afghanistan.

Monica Bascio broke her back going over a ski jump.

The stories behind the competitors in the adaptive races for disabled competitors at the U.S. Cross Country Ski Championships are compelling and heart-wrenching. But the athletes themselves have kept the stories from being tragic by focusing on their competitive zeal.

Seven Americans and one Australian have competed this week in the national championship races at Kincaid Park. Regular skis are attached beneath a metal stool or chair and the racers propel themselves with double-pole pushes.

A ninth competitor, Kelly Underkofler, is the lone racer in the adaptive stand-up events.

“I thought my athletic life was over after the accident, but the (Department of Veterans Affairs) introduced me to sports at a summer camp and I figured I got to take this as far as it will go,” said Halsted, shortly after finishing the 10-K sit-ski race at Kincaid on Wednesday.

After starting out with summer sports, “I found skiing. I found the exercise I was looking for. It gave me a reason to get up in the morning.”

Halsted, of Ephrata, Wash., paused for a bit and, thinking the last line sounded too serious, suggested it should be followed with, “he said jokingly.”

Wednesday’s 10-kilometer men’s event was on a 2.5-K course looping around the main stadium area. Paraplegic competitors, their shoulder muscles bulging, strained to push themselves up the hills. They had hardly a moment to relax before pushing downhill.

At the finish, Halsted had the fastest time of 32 minutes, 56.9 seconds, followed by Soule and Klebl. But when their times were adjusted for their respective disability levels, Klebl, from Heber City, Utah, took home the gold medal, with Halsted earning silver and Soule, of Pearland, Texas, the bronze.

“I’m not racing just against them, but also against the extra time factor,” said Soule, who doesn’t get a time deduction because he has use of all of his upper body muscles. Halsted can use 98 percent of his muscles and got a 29.5-second deduction in the race, while Klebl is at 94 percent and had two minutes deducted from his time.

“Basically, it is based on how high up the spinal cord injury is,” Soule said.

Monica Bascio of Evergreen, Colo., was the only racer in the women’s 5-K sit-ski on Wednesday. Her handful of titles at Kincaid over the last two years go along with five wins in the Fairbanks-to-Anchorage Sadler’s Ultra Marathon handcycle event.

Asked what she’ll be doing next time she comes to Alaska, Bascio responded, “I think I’ll go on vacation.”

Underkofler, who was born with her left arm ending in a stump above the elbow, skied in the 5-K classic juniors race on Wednesday and finished just two minutes behind the last able-bodied skier.

The explosion of going from a standstill to a sprint at the start of the race left Underkofler wobbly because she only had one pole to balance with. She also had to work harder to keep from slipping going up hills.

“I like to race against able-bodied women. It’s something to push myself against,” Underkofler said. “In a classic race it is a big disadvantage for me. With only one pole, if at any point I slip, I can’t recover and catch myself. This course has some really good hills. I just worked on keeping my rhythm.”

The Minnesota native began skiing when she was 3 and raced against able-bodied skiers through high school before joining the U.S. Adaptive Ski Team in 2002.

She recently began to focus on another sport: biathlon.

“You don’t carry a rifle with you. At the shooting station, the gun is set up on a support on a spring. It moves similar to a hand,” Underkofler said, plopping herself into the snow to demonstrate, sticking her disabled arm into the ground as a support and mimicking a trigger-squeezing motion with her right hand.

Underkofler is already ranked third in the world in the adaptive biathlon. The gun stations are set up differently for each athlete based on their disability, and there is even a Paralympian who competes with no arms.

“She has a more stable gun stand and an extension she can pull with her teeth,” Underkofler said.

There are even blind Paralympic biathletes, who rely on an acoustic system that emits different tones as the rifle is aimed at the target.

The ability of the competitors to adapt and excel impressed bystanders on Wednesday.

A friend of Halsted’s, who participated in Air Force training with him before the injury, tracked down his old pal at Wednesday’s race.

“We were good friends, but then we parted ways and were on different sides of the country,” said Doug Widener, now in Alaska with the Air National Guard’s 212th Pararescue Unit. “I just happened across an article on him recently and decide to come out here.”

Widener was impressed with what he saw from the adaptive competitors.

“These are folks that didn’t cash it in and let life end for them after their injuries,” Widener said. “(Halsted) is a great role model for people. He shows that you can recover from a tragic accident. That you can come back and continue to do something good with your life.”

That message is something Halsted wants to spread.

“I’m not in this just for myself, but to show what is possible,” Halsted said. “I know when I saw others doing it, it opened my eyes.”