‘Avatar’ Gets Mixed Praise From Paraplegics 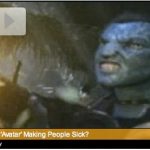 Like others who flocked to see the blockbuster movie “Avatar,” 26-year-old Santina Muha was thrilled by the visuals.

But unlike the majority of people in the theatre, she wasn’t just imagining life on the distant moon Pandora. She was vicariously living the fantasy of regaining the use of her legs.

“The scene where the character goes from his wheelchair into his ‘avatar,’ where he’s walking and playing basketball, it was really touching,” said Muha, who had a spinal cord injury in a car accident at age 5.

“It gave me chills,” she said. “I’m a wheelchair user for 20 years; I can’t even remember what it was like&just stretching his legs out like that. He must have just felt like it was the ultimate stretch.”

Audiences learn that the hero, Cpl. Jake Sully, lost the use of his legs while on duty as a Marine. Sully, played by able-bodied Sam Worthington, ends up on a mission to the lush moon of a distant planet where current technology gives his mind access to a cloned body of one of the local humanoid aliens, the Na’vi.

The human-Na’vi interactions on Pandora have drawn criticism and praise for what some see as political undertones about conquest, environmentalism and war.

But for Muha and others with spinal cord injuries, the movie’s greatest statement was to feature a paraplegic lead character in an action movie.

“I didn’t feel like it was a pity story about someone in a wheelchair,” said Muha, a communications associate at the National Spinal Cord Injury Association and the current Ms. Wheelchair New Jersey.

Steve Coleman, of the Christopher and Dana Reeve Foundation, thought “Avatar”succeeded in showing the mental and emotional strength of disabled veterans.

“It showed you perspective that, although his legs weren’t working, his heart and mind were working,” said Coleman.

Coleman, who spent 25 years in U.S. Army Special Operations, also thought Sully’s interactions with the Na’vi and with other soldiers on Pandora reflected some real-world dichotomies in the military.

Did Hollywood Strike Out With Wheelchair Users in the Past?

Despite the military themes, Sully’s paralysis was pivotal to the plot and the moral crises he faced in the movie.

Muha and other spinal cord injury advocates say they felt his decisions about living in a wheelchair were a welcome change from the way paraplegics are frequently portrayed in popular movies.

Classic Hollywood often used wheelchairs as a symbol of life’s tragedies. In “An Affair to Remember,” Deborah Kerr loses the use of her legs — and Cary Grant’s love as well.

Recent movies have taken an even darker view of disability.

“‘Million Dollar Baby’ — that was really, really badly done from a person-with-disabilities perspective,” said Phil Klebine, who is a counselor and a tetraplegic. He has paralysis in his arms and legs, but is able to use a wheelchair.

“Million Dollar Baby” won the Adademy Award as best picture of the year. Directed by Clint Eastwood, the film follows a young woman named Maggie, played by Hillary Swank, who wants to become a boxing champion but is paralyzed in the ring.

“What I hated about ‘Million Dollar Baby,’ it showed all the worst things about having a disability,” said Klebine, who thought all the complications Maggie suffers after her accident could have easily been avoided with decent care.

“They also showed this 90-pound woman have four or five people transfer her. Totally ridiculous,” said Klebine, who works at the department of physical medicine and rehabilitation at the University of Alabama at Birmingham. “She wouldn’t need that kind of assistance to transfer her to a wheelchair. My mom can transfer me and I’m 240 pounds — and my mom is 64 years old.”

“He would rather stay on this island with smoke monsters than go back to Earth in a wheelchair,” said Muha. “Me? I would pick to stay here with my friends and family.”

J. Scott Richards, director of research at the Physical Medicine & Rehabilitation Center at the University of Alabama, said Sully’s character flaws in “Avatar” also made the film appealing.

“The other thing that people in wheelchairs might appreciate is having a key character who is not a super achiever,” said Richards, who counsels patients after spinal cord injuries.

Richards said Hollywood portrays extremes when it shows characters with disabilities: “A physically achieving athlete in a wheelchair, or the opposite end of that — someone who is miserable and has a horrible life.

Santina Muha said she got “chills” watching Sully, the paraplegic from “Avatar.”

“I’d much rather see the middle of the road. Where people are just people but they happen to be in a wheelchair,” he said.

Producers of the film at Fox did not reply to requests for interviews for this story.

While “Avatar” rings true emotionally with some, that doesn’t mean people who use wheelchairs think it’s completely accurate.

“As a person with a spinal cord injury, you kind of notice a few things that are out of whack,” said Klebine.

Many wheelchair users said Sully’s legs looked skinny, and wondered if director James Cameron had digitally altered them to make them appear atrophied.

They also noticed a detail others might miss — that Sully didn’t have a specialized cushion.

“Even for people in manual wheelchairs, they use some sort of cushion to prevent pressure sores,” said Klebine.

Muha said Sully labored too much when he got in and out of his wheelchair.

“There was one scene when he was doing a transfer and he had to pull his legs over — I thought he struggled too much with the weight of his legs,” said Muha. “I’m a little girl, and he was a big strong guy. It should take much less effort for him to transfer.”

Still, Muha and others were glad to see a disabled character in a movie about something other than disability.

“I do think that it’s an advance in seeing people in wheelchairs in the entertainment industry,” said Klebine. “I just wish people who have a disability get a chance to play those roles.”

Wheels in motion for new park

Search for biomarkers of injury severity to assist patients with spinal...