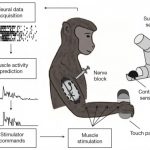 Scientists at Northwestern University in Chicago, with funding from the National Institutes of Health, have successfully bypassed the spinal cord and restored fine motor control to paralyzed limbs using a brain-computer interface.

The researchers have created a neuroprosthesis that combines a brain-computer interface (BCI) that’s wired directly into 100 neurons in the motor cortex of the subject, and a functional electrical stimulation (FES) device that’s wired into the muscles of the subject’s arm. When the subject tries to move his arm or hand, that cluster of around 100 neurons activates, creating a stream of data which can then be read and analyzed by the BCI to predict what muscles the subject is trying to move, and with what level of force. This interpreted data is passed to the FES, which then triggers the right muscles to perform the desired movement.

The end result is a computer network that effectively replaces the nervous system and restores remarkably accurate fine motor control to a paralyzed arm — watch the video below and be amazed. You will notice that, as always with bleeding edge science, the subject of this study is a rhesus monkey rather than a human — but our anatomy is very, very similar to that of our primate cousins.

The novel element of Northwestern’s neuroprosthesis is the introduction of a brain-computer interface. At the moment, state-of-the-art solutions use FES devices with pre-programmed basic movements (arm lift, hand open, etc.) that are triggered by small muscle movements in non-paralyzed muscles. With the BCI, rather than listening for second-hand signals, around 100 neurons from the specific region of the motor cortex that handles arm and hand movements are used. As you can see from the video, not only is this approach responsive, it seemingly allows for a whole range of grasping movements.

Now, it’s important to bear in mind that we’re a long way away from human trials — these monkeys had a multi-electrode array directly implanted into their brains — but, even so, we should still be very excited. This is a hugely important step towards bionic implants that make paralysis a thing of the past. It might even be the answer to other neurological diseases, such as Parkinson’s. The research paper (paywalled) notes that, worldwide, 130,000 people per year sustain spinal cord injury — with half of those becoming paralyzed from the neck down.

Even healthy humans — especially those of transhumanist stock — might want to replace or augment their nervous system with a computer network. Due to slow clockspeed and neuron-neuron signal propagation, human reaction time is fairly lackluster — but what if we had a computer coprocessor and electrical wiring that kicked in, when needed? Like modern cars that have complex timing and power control systems, what if humans could run faster or stay awake longer if we had a computer system to help out? You’d be able to connect to your on-board (on-brain?) computer via your smartphone, of course, and tweak various settings…

Paraplegic man proves ‘anything is possible’