MYRTLE BEACH, S.C. (WBTW) – With the help of friends and family one local quadriplegic man is working towards becoming a professional body builder.

Ernie Johnson says in the last 17 years he has been in a wheelchair he never felt he had an excuse to give up.

“I had to find a different way to be athletic,” he said. 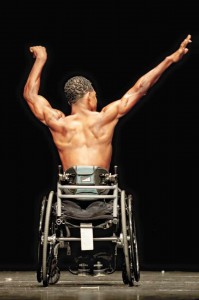 In 1997, Johnson broke his neck and damaged his spinal cord on the football field for Conway High School.

In a split second, he went from a 17 year-old in the prime of athleticism to being paralyzed.

Something that could bring anyone down, but Johnson says he had support.

“There wasn’t one single day that I did not have at least 5 or 10 visitors come by. I never had a chance to sulk or feel sorry for myself,” he said.

Nearly 20 years, later Johnson still has support from his friends and his wife, Megan.

Johnson says even though he has continued to work out since his injury, in March of this year at his first wheelchair body building contest he got to experience something he has not felt since his days on the field.

“That competitiveness just came right back to me. I’m trying to eat better and work out harder and I missed it,” said Johnson.

He says the sport of wheelchair body building is gaining popularity and now that he has the chance to compete again he is making it his goal to improve and one day become professional.

Johnson says when people look at him they assume being in the chair is his biggest struggle; when at this point it is just a part of his life.

Instead he says, everyone has issues it is how we handle them that is important.

“My goal is not to be inspirational. My goal is to be the best me and instead of looking for reasons not to do it I look for ways to do it. Every day I find a new reason to be better,” he said.

Johnson’s next competition is in August.