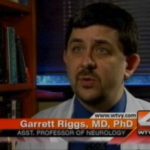 Garrett Riggs, M.D., Ph.D., Assistant Professor of Neurology at the University of Central Florida in Orlando, Fla., talks about whether retraining neurons can benefit patients with spinal cord injuries.

Garrett Riggs, M.D., Ph.D., Assistant Professor of Neurology at the University of Central Florida in Orlando, Fla., talks about whether retraining neurons can benefit patients with spinal cord injuries.

Can retraining the neurons somehow regenerate the spinal cord so that patients can not only get better movement than doctors thought, but they may even be able to walk again?

Dr. Garrett Riggs: The research is promising, but it’s far from conclusive. There are some studies looking at patients who undergo physical rehabilitation of varying intensities. We know that physical rehab helps, we know that it improves overall function, but whether a more intensive regimen works for all patients is not really clear yet.

What’s the conventional wisdom about recovering from spinal cord injuries?

Dr. Riggs: The conventional wisdom is that once the spinal cord is injured, you’re pretty much done. As the swelling decreases, you may have some mild return of function, but basically, once the cord is injured, that’s it. However, we now know that contrary to what we used to think, that nerve cells never grow, nerve cells do grow. The problem is getting them to grow from the right spot and make the right connections. Exactly how that’s going to be facilitated is ultimately probably going to be a combination of molecular techniques and also rehabilitation.

Currently, the research doesn’t back up the fact that you can just go in there on an extensive regimen of physical therapy and that’s going to regenerate, is that right?

Dr. Riggs: Correct. We don’t really see clear evidence in humans of regeneration based on intensive therapy, but it’s something that certainly merits further investigation.

Is it creating a false hope for these people that there’s something out there saying that if you do all this intensive physical therapy, you may be able to walk again or you may be able to be a lot more mobile than you think you are?

Dr. Riggs: All patients are different, so when we talk about spinal cord injury, it’s not a homogenous entity. Some patients may well benefit from this whereas others won’t. The other issue to consider is that sometimes just a tiny improvement, from an objective point of view, is enough to really help the patient’s activities of daily living. For example, someone who is, say, functionally quadriplegic, if they can simply get back a muscle twitch of their finger, that may be enough to allow them to operate a motorized wheelchair and other assistive devices, so it’s a question of degree.

What about the therapy that is offering or saying that you’re going to obtain a much larger degree than anybody?

Dr. Riggs: I would be skeptical of that right now, but again, it’s something we don’t really have much data on. Hopefully, this new center here will help us generate more studies of patients to help better predict who’s going to respond to this regimen and who’s not. The research really is just in the beginning phases.

Do you see anything to all that or do you think it’s going to be more of a combination of not just physical therapy, but also something in the molecular or genetic level?

Dr. Riggs: I think the ultimate solution is going to be multi-modal. It’s going to be physical therapy, molecular, perhaps genetic. For now, what we really need in this area are some clinical trials where you take patients and enroll them in traditional therapy and compare them to the more intensive regimen and try and get homogenous groups that can be compared, and then you’ll really have a better sense of whether one regimen is superior to the other.

In your practice or other research studies, have you found that patients will hit that week or month mark, or whatever it may be, and then they do not improve much beyond that point, regardless of what’s done?

Dr. Riggs: That’s correct. Most patients who sustain a significant spinal cord trauma are left with more or less permanent neurological deficits. The degree to which those can be modified is still something that we don’t really understand.

Up to this point, has there been much success with that?

What are the benefits of other treatments that patients have tried?

Dr. Riggs: Surgery doesn’t help. Physical therapy, really, to try and optimize what the patient has left is one of the goals. Medications really treat only symptoms and a number of other modalities – electrical stimulation, spinal cord implantations, robotics – these are all areas that people are interested in, but we don’t really have clinical applications for those yet.

Do the initial studies that have been done show that these methods are inconclusive?

Does inconclusive mean they don’t work?

Dr. Riggs: It means that there were no statistically significant difference between groups and that always leads you to the question of, was the problem with the selection of the groups? Was it the treatment that didn’t work or did the treatment work and you just didn’t measure the right variable?

This is one of the downsides of this kind of research is that there are so many nuances involved that it’s hard to say conclusively, particularly in the very early stage, whether something’s effective and how effective it is and whether it’s effective for all patients.

With the whole idea of retraining the neurons in spinal cord injury, isn’t it common wisdom that once those cells are cut and the cord is cut, that’s it? So does that really go against most conventional thinking?

Dr. Riggs: That was conventional thinking up until probably the last ten years. For example, even when I was in med school, we often taught that once nerve cells are dead, that’s it; there’s no regeneration, or after you reach adulthood, your nerve cells no longer regenerate. Well, that’s wrong. It’s just wrong, and it’s only been shown in the last ten years that nerve cells actually do re-grow and they regenerate and they do rewire. It sort of makes sense, otherwise how would we ever learn anything new? It hasn’t led to clinical improvements in patients with severe spinal cord injury.

How does spinal cord injury affect the skin?

What are the effects of SCI?