Golf: A game for everyone 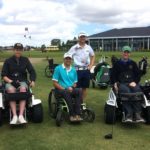 After becoming a quadriplegic in 2008, Sydneysider James Gribble’s is on an inspiring journey to make golf accessible for all abilities.

Everything changed in James Gribble’s life when an accident in 2008 left him with a broken neck. But one thing remained the same – he’s still a golfer.

Though it wasn’t easy for the quadriplegic.

For four years, he endured intensive rehabilitation, proving a series of doctors wrong to achieve significant recovery milestones – walking short distances on crutches and, most importantly, swinging a golf club.

Then there was getting used to a lifestyle completely different to the one he used to lead as an investment banker working in London for 10 years. The University of Sydney economics graduate would travel the world playing golf with his low, single-figure handicap.

But after eight years of incredibly hard work establishing his charity Empower Golf, Gribble is able to introduce – and re-introduce – the sport of golf to others who were born with or sustained disabilities.

“I founded Empower Golf to facilitate and promote golf for Australians of all abilities.”

As inspiring as the concept was, Gribble knew he needed a plan to be taken seriously. So he formulated an action plan consisting of three crucial steps.

The first was to establish Empower Golf Hubs at courses nationally to enable access for all abilities – essentially signing off a course as an Empower facility.

“It was basically getting courses to promise access for disabled golfers to the course, pro shop, car park and disabled toilets,” says Gribble.

The second step was to work with those Empower Hubs to provide and fund equipment for disabled golfers, such as automatic golf tees on the driving range and other adaptive solutions. Most importantly, buying a remarkable piece of machinery called the Paragolfer.

“When I broke my neck, I literally had no movement from my head down,” recalls Gribble.

“But I was a really passionate golfer and once I could stand a little and use my right arm, friends could strap a hand onto my club and I could have a go as I stood on crutches.

“So I found the Paragolfer. It’s an all-terrain, purpose-designed power wheelchair allows someone with mobility issues to stand up using hydraulics in the seat to play golf.

“It’s also built with pressure sensitive tyres so you don’t damage the greens and it features specialized wheels to allow the user to drive in and out of bunkers.”

The third step was to encourage PGA Professionals and those who work in the golf industry to get involved with making golf more inclusive. The PGA of Australia has developed a blind and disabled coaching accreditation program for Members. Now, those accredited Pros can run disabled golf clinics so students can improve and, eventually, compete.

Empower Golf is currently working with its network of clubs and the PGA of Australia with the aim of staging three multi-disability state championships in Victoria, New South Wales and Queensland in 2017 putting Australia at the forefront of the game.

“As it stands, there are only a few thousand disabled golfers in Australia even though golf is one of the highest participated ball sports,” says Gribble.

“There are small disabled golf associations but they’re very specific to certain disabilities. But at Empower, we’re all about looking after everyone. Getting disabled golfers out onto courses in what are usually amazing locations, being exposed to social activity and the ability to compete with one another, psychologically it’s one of the most powerful parts of what Empower does. It’s fantastic.”

Looking ahead, Empower Golf is working with international bodies to have paragolf included in the 2024 Paralympics.

So what would it mean to Gribble if he were able to see paragolfers represent their country on the biggest stage?

“That’s a very good question,” says Gribble. “After what started out as basically a pipe dream, to see that come to fruition, especially after so much hard work, it would be a life goal come true.”

In the meantime, he is also chipping away at other life goals – namely ticking courses off his bucket list.

“When I was living in London and before I broke my neck, I had a race with a mate to play the UK’s top courses the fastest. I played British Open rota courses like Royal Troon, St Andrews, Muirfield and Carnoustie. In the US I’ve also been fortunate to play courses including Shinnecock Hills and Pebble Beach.

“But Ellerston was a different beast – every hole was the best hole you’d ever seen. I’ll never forget that round.”

Everyone deserves the opportunity to pick up a club and play golf, and the PGA is actively encouraging its PGA Professionals to become accredited coaches to support those with a disability on the golf course. A new e-learning module is now available via the PGA ACE Program.

Facebook
Twitter
Email
Mix
Digg
Previous articleinventability.net
Next articleWhat are stem cells and how will they be used to treat the world’s most debilitating diseases?

Memoirs of a Body – A Short Documentary