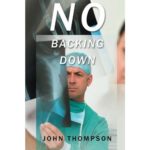 OLYMPIA, WA (PRWEB) January 17, 2017 – John Thompson was only a boy when a car stuck him, leaving him a quadriplegic. Despite the paralysis of both arms and legs, Thompson used his personal setbacks as motivation to drive forward and create a fulfilling life for himself. He now looks to inspire others to do the same with his book “No Backing Down.”

Based on true events, “No Backing Down” chronicles Thompsons’ journey from youth to adulthood with C-4 quadriplegia. He shares raw details about the car crash that left him paralyzed, as well as his intense medical journey.

Guided by his faith and embolden by his struggles, Thompson refuses to let life’s ill-fated circumstances stop him from achieving happiness. He returns to school where he earns a degree in psychology, using his new education to become a family counselor.

“Too often I’ve watched as disabled people get put into a facility and deprived of life,” Strong said. “Despites years of setbacks and unimaginable challenges, I was able to build a life for myself because I refused to let anything or anyone hold me back. I want to foster the same kind of motivation in others with No Backing Down.”

His story is one of redemption and perseverance, demonstrating how undesirable circumstances do not determine one’s future.

About the Author
John Thompson works as a family counselor out of Olympia, Washington. He attended University of Phoenix and received his degree in psychology. A C-4 quadriplegic since childhood, Thompson challenges society’s view on the capabilities of the disabled and inspires others to push their limitations as well.

Technology, trends, and the future for people with spinal cord injury