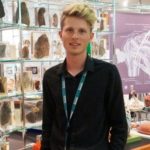 It’s very early days in the development of the technology, says Jarred, (25) who is a doctoral student in the Centre for Brain Research at the University of Auckland, working with a team of researchers to pioneer the gene therapy.

His work is funded by the Catwalk Spinal Cord Injury Research Trust who awarded him a $100,000 three-year doctoral scholarship in 2014 to carry out this work. Jarred works with senior spinal cord injury researchers Professor Louise Nicholson and Dr Simon O’Carroll.

“I’m very grateful to the Catwalk Trust for their support and try to give back to them as much as I can,” he says. “After working for Simon, I wanted to do a PhD, as I enjoy the science, and was offered this project – creating a viral vector gene therapy for spinal cord injury.”

Last year, the first step in this research, (finding a suitable viral vector), won the team a Velocity Innovation Challenge award as the UniServices prize-winner.

In a spinal cord injury, the injury site forms a hollow centre in the spinal column where the cells die back, surrounded by dense scar tissue. The scar tissue is a problem because it prevents the damaged neurons from growing back or new motor neurons sprouting.

This therapy advances on what was pioneered by a research group at Kings College London, in which an enzyme was delivered using an intra-spinal cord catheter that functions to break apart molecules that form the scar tissue.

But the enzyme is short-lived and the catheter stays in place for two weeks, so both aspects increase the risk of infection and damage in the spinal cord.

“The way to get around that is to introduce genetic material directly into the cells to have a therapeutic action,” says Jarred. “We genetically engineer harmless viruses because they have a natural ability to infect cells and then deliver genetic material,” he says.

“We remove the viral DNA from these viruses and replace it with human DNA using the shell of a virus as a delivery system,” he says.

The first part of his research involved investigating different viral vectors with “reporter” genes that report which cells have been infected to determine which kind of virus was best for this.

The next step this year is to create a therapeutic virus and test it in cell culture. He already has interest in the new gene therapy technique from pharmaceutical companies.

He wants to focus on this aspect of gene therapy research, as it has the potential for increased function for people who are confined to wheelchairs.

The gene therapy may work on breaking down the scar tissue cells even for people with older spinal cord injuries, he says.

“It may be possible that even in such an injury, we can still promote a juvenile state of neurons, but we are relying on some natural sprouting of new neurons from parts of the spinal cord that are still healthy,” says Jarred.

“If we can restore some bowel and bladder control, this therapy may give them hope and a better quality of life,” says Jarred.

-The University of Auckland