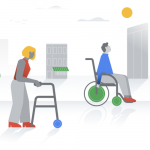 Imagine making plans to go somewhere new, taking the journey to get there and arriving— only to be stuck outside, prevented from sitting with family or being unable to access the restroom. It’s a deeply frustrating experience I’ve had many times since becoming a wheelchair user in 2009. And it’s an experience all too familiar to the 130 million wheelchair users worldwide and the more than 30 million Americans who have difficulty using stairs.

So imagine instead being able to “know before you go” whether a destination is wheelchair accessible, just as effortlessly as looking up the address. In recognition of Global Accessibility Awareness Day, we’re announcing a new Google Maps feature that does just that.

Better maps for everyone, whether you walk or roll

With this feature “rollout”, it’s easier to find and contribute wheelchair accessibility information to Google Maps. That benefits everyone, from those of us using wheelchairs and parents pushing strollers to older adults with tired legs and people hauling heavy items. And in this time of COVID-19, it’s especially important to know before you go so that you won’t be stranded outside that pharmacy, grocery or restaurant.

To get wheelchair accessibility information more prominently displayed in Google Maps, update your app to the latest version, go to Settings, select “Accessibility,” and turn on “Accessible Places.” The feature is available on both Android and iOS.

A Maps milestone, built on a movement

This launch is a milestone in our journey to build a better, more helpful map for everyone, which includes recent efforts to help people find accessible places, transit routes and walking directions. Our work wouldn’t be possible without the decades of advocacy from those who have fought for equal access for people with disabilities. Were it not for them, there would be far fewer accessible places for Google Maps to show.

The Accessible Places feature is starting to rollout for Google Maps users in Australia, Japan, the United Kingdom and the United States, with support for additional countries on the way.