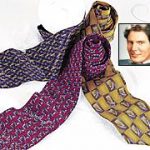 Silk ties sold exclusively in J.C. Penney department stores that are inspired by drawings contributed by celebrity friends of Christopher and Dana Reeve as well as by individuals who are living with spinal cord injuries. Four percent of the proceeds from sales are donated to the Christopher Reeve Paralysis Foundation.

There are plans for future ties to be designed by Jane Seymour, Margot Kidder, Harrison Ford, Kevin Costner and Robin Williams.

Facebook
Twitter
Email
Mix
Digg
Previous articleWhat is paralysis?
Next articleWhat is the nerve center at L1? Why can’t anyone with an injury below that have function below injury, or respond to FES?

RESPIRATORY TREATMENTS WITH A NEBULIZER