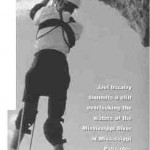 Perched 60 feet above the ground and alongside a cliff at Mississippi Palisades State Park, first-time rock climber Joel Irizarry took a quick breather. Though he was exhausted, his arms at the point of collapse, Irizarry wasn’t about to quit. He had to prove to himself that he could reach the summit. So grabbing hold of the specially designed gear, he hoisted himself up the remaining 20 feet to the jagged peak. At the top, Irizarry paused to watch the backwaters of the mighty Mississippi River glitter in the early evening sun. This, he thought, is just so beautiful.

Far below the dangling feet of the 19-year-old Paraplegic rested his wheelchair, unoccupied for the first time since he awoke that morning.

Moving Mountains, a privately operated adventure program now in its sixth year, yanks people with spinal cord injuries from the concrete and metal inundated Chicagoland area and thrusts them into the wilds of the natural world, where they are put to the ultimate sports fitness test. Following short training sessions, participants rock climb with adapted climbing gear, kayak, hike, cycle and camp in an effort to challenge themselves physically and mentally. The annual three-day program, which occurred in early June at Mississippi Palisades State Park, is designed to remind people like Irizarry that their Disability doesn’t restrain them from performing almost all of the same feats an able-bodied person could do.

“My main goal was to climb that mountain, and I did it,” said Irizarry, who is also afraid of heights. “I like taking risks.”

He paused and then turned to his friend.

“You think they’ll ever do bungee jumping?”

Moving Mountains merges Rehabilitation nurses, occupational and recreational therapists, physical therapists, personal trainers and volunteers with men and women with spinal cord injuries for a weekend of sports challenges. Both rehabilitation workers and patients compete in the activities. Program co-founder Pat Maher, who is spinal cord injured, said the goal for the 45 or so health care workers and 15 wheel-chair-bound participants who attended is team building and the opportunity for those with spinal cord injuries to prove they are able to triumph over adversity.

“This Disability magnifies your life challenges,” Maher said, “and the program puts them through a lot of new challenges. They go home with new energy and added confidence.” 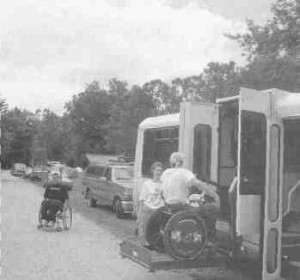 And often, gaining back confidence and self worth is critical to the Rehabilitation process after a person has become spinal cord injured. Other problems, including respiratory ailments, bladder infections and pressure sores, often plague a person with a spinal cord injury.

“When an injury happens, it is just so hard to adjust to the change. There’s so much to deal with,” said Mercedes Rauen, executive director of the Illinois Chapter of the National Spinal Cord Injury Association. “They have to go from being totally self-sufficient to relying on others.”

The outdoor excursion unites people with spinal cord injuries with others who are having similar problems and dealing with the same situations. The National Spinal 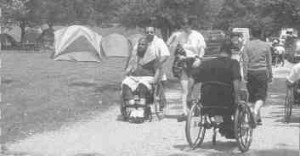 Rauen said that while recovery initially begins in area hospitals and rehabilitation centers, conversing with people who have gone through the same ordeal is the capstone of the healing process. Those recovering from spinal cord injuries share important information with each other, such as how to cope with the mental strain that an injury causes and how to deal with medical or family situations. Rauen said this is just another reason why the Illinois Chapter of the NSCIA is the prime sponsor of Moving Mountains. 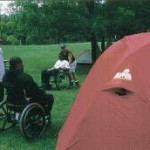 “Health organizations do a wonderful job of rehabilitating a person but until that person has talked to someone who’s gone through what they have, it’s just not the same thing,” she said. “Peer support is an invaluable experience. With so many changes, it’s overwhelming in the beginning, but with a good support system, both medical and from friends and family, they can cope with it and have a good life.”

Moving Mountains originated in 1995, a year after co-founder Eric Larson and two other able-bodied men climbed Mount Rainier in Washington as part of “Climb for a Cause,” an effort to raise awareness of spinal cord injuries. In conjunction with the Illinois Chapter of the NSCIA, Larson and Maher proposed a similar adventure challenge, but one that would take place in Illinois and include people with spinal cord injuries. 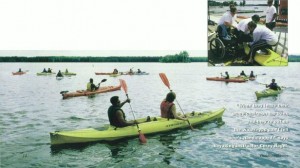 In August 1995, Maher, Larson and two others completed a four-day program of cycling, canoeing and rock climbing to prove it could be done. Only Maher was in a wheelchair for the initial outing, but the annual event has attracted more people with spinal cord injuries each year. The number has increased from three in 1996 to 15 this year. As the participants amassed, so did the amount of activities, with program costs being borne primarily by the participants. 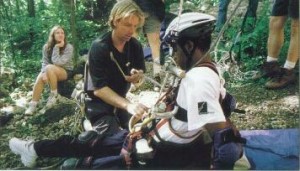 Although the newly anointed sportsmen in the Moving Mountains events are able to receive assistance from the workers, it’s still a long way from the structure of Chicago’s rehabilitation centers. Now in the natural territory of the palisades, they are focused on how to complete the challenges ahead of them. Also, for the majority of the Chicago-based participants, it is their first time in the outdoors, which can be a radical change from nights in the inner city to nights camping beneath the stars at one of Illinois’ finest recreational areas. High bluffs bespeckled with lush trees, an array of trails for hiking and a breathtaking view of numerous, tiny islands in the crisp backwaters of the Mississippi are just some of the natural wonders of the state park.

“For some people that have gone on Moving Mountains, it’s the first time they’ve done anything physical like that since the injury,” Rauen said. “It’s a great adventure to them.”

So while Irizarry snapped pictures from his spot along the palisades, 80 feet below him and a mile north, another group set out kayaking for their first time ever. Cory Nagel, a program specialist for the Rehabilitation Institute of Chicago, led the group in a brief instructional lesson on kayaking before preparing for the trek.

Sitting comfortably in their wheelchairs, Tony Boatman and Cleven Head watched with two different sets of expressions as Nagel demonstrated how to maneuver the kayak in the water, paddling techniques and what to do if a kayak flipped. As Boatman sat with a smile that showed all teeth. Head’s face was ashen and his goals simple.

Later, leaving their wheelchairs vacant. Boatman and Head were helped into the kayaks and paddled off. Even though neither had kayaked before, within moments they were gliding easily across the still waters, as some of their able-bodied counterparts lagged behind. Nagel said getting people with spinal cord injuries out paddling releases them from the confines of their wheelchairs and transports them out into a zone where everyone operates on the same level.

“When they leave their wheelchairs on the bank and they’re out on the water, you can’t tell who’s handicapped,” Nagel said. 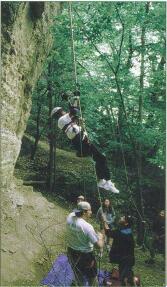 And no one watching from the bank would have known which guys had only moments before occupied the four empty wheelchairs parked alongside the river. For out on the waters, the wheel-chairs were no longer part of the men who now tobogganed across the muddy waters.

As they learned to maneuver the kayaks, Boatman and Head joked and teased each other about their paddling skills. When Head lagged behind, Boatman was there urging him forward. The rest of the group worked as a team as well, giving encouragement to those who needed just an extra push.

“I think it helps them more emotionally than anything else,” Rauen said about the Moving Mountains experience. “They’re proving to themselves that they can do it. Some may not reach the top of the mountain, but they tried, and there’s great value in that.”

And while everyone got the chance to hike, kayak, cycle and rock climb, many didn’t reach the top of the cliff. Sheninga Scales, who as a quadriplegic cannot use his legs and the majority of his arms, managed to lift himself up about 35 feet by just using forearm strength, an amazing endeavor considering the physically rigorous exertion of lifting his body weight up the pulley system. Another Paraplegic, 21-year-old Terrance Harden, scaled 50 feet before becoming physically exhausted from a climb that would tire even avid rock climbers.

“Not bad on two bologna sandwiches, huh?” Harden joked. “My New Year’s resolution was not to break a sweat, and you guys made me break it.”

Harden was grateful for the experience of “seeing it all” from his cliff side location. And, he added, “I get to tell my daughter I climbed a rock.”

Not every father can say that to his daughter, especially not a father who, for the most part, is confined to a wheelchair. And it’s this knowledge that makes the altruism of Larson, Maher and the other Rehabilitation workers in attendance all worth it. When the group wrapped up the activities on Sunday, after three days of gaining unique skills and meeting new friends, all agreed it was an intense weekend they’re not likely to forget. 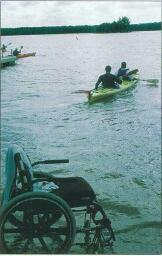 (Near right) Seales hoists himself up with the aid of specially-designed climbing gear. (Far right) With instructor Chris Nagel’s help, Tony Boatman leaves his wheel-chair on the river’s bank to canoe out into the Mississippi River.

“I never wanted to come back in,” reflected Boatman upon his kayaking experience. “The group radioed in that it was chow time, otherwise I would still be at it.”

For Boatman, leaving his wheel-chair on the shoreline and paddling into territory he had never before delved into left a lasting impression that no injury could ever take away. He just grinned at the memory, looking like a man who had just moved a mountain.

“I felt like I still had everything and lost nothing.”

For more information about Moving Mountains, contact Eric Larson at (847) 640-1515. Info about Mississippi Palisades State Park is available from the DNR Clearinghouse at (217) 782-7498 or by accessing the Department’s website: dnr.state.il.us/lands/landmgt/parks/palisade.htm. 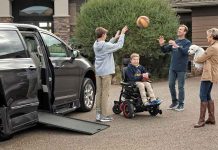 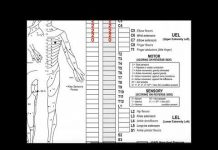 The scourge of bedsores is being confronted