Crash survivor learning to breathe on his own 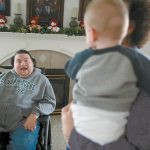 ROY — Braden Howe tells jokes, surfs the Internet and makes goo-goo eyes at his nephew, Carter, who squirms and giggles at his uncle’s attention.

But making goo-goo eyes is about all that Braden can do since the accident 10 years ago. Dandling his 6-month old nephew on his knee, for example, is out of the question.

Remember Christopher Reeve, the movie star? Braden has that exact kind of injury. Reeve broke his neck on a horse, Braden on a bicycle, but the result was the same: total paralysis from the neck down.

And, like Reeve did before he died in 2004, Braden is working on the newest major accomplishment of his life: breathing on his own.

Well, almost breathing on his own.

Howe, 23, is the 25th person in the country to get a diaphragm pacer, a device that helps him breathe without using a Ventilator. He got the device last May because his father saw a TV interview in which Reeve talked about getting the same thing in 2003.

The device is not approved by the FDA — yet, but Braden and his mother, Nancy, say it allows him to breathe on his own up to eight hours a day. Most who have the device learn to go much longer, giving them more independence than ever before.

Braden said his accident 10 years ago started out as just another day’s play on his bicycle.

“I was just riding my bike over to my friend’s house,” he said.

“Other than that, I don’t know what happened. I guess I rode in front of a car and it got the best of me.”

“As best as we can tell, he was riding along. Gerry was at the corner, and he saw Braden come and said he wished he had reached out” and stopped the boy.

“It was Braden’s fault, not the car’s fault,” Nancy Howe said. “He hit the Bronco and bounced up on the windshield and then fell down, and it ran over him and that was where he was paralyzed.

“They didn’t think he was going to live, but he has.”

People with spinal injuries are desperate for miracles.

Kirk Green, a Layton schoolteacher paralyzed from the neck down in a 2004 snowmobile accident, went to China in January for an experimental stem cell transplant. He hopes the surgery will give him use of his arms and legs again.

When people like Reeve and Braden are paralyzed from the neck down, they can’t breathe on their own. Unless the spinal cord can be repaired and the nerves reactivated, something has to breathe for them.

Nancy Howe said that when Reeve had “that interview with Barbara Walters, my husband got on the Internet and found their Web site and called.”

What Reeve had was the diaphragm pacer, which works something like a heart pacemaker.

Without a ventilator forcing air into Braden’s lungs, he would die, “and he did die twice on me, when the power failed,” Nancy Howe said. She always managed to bring him back.

The ventilator is the size of a small suitcase and has tubes and hoses. The pacer is small, the size of a handheld electronic game, and hooks up to four thin wires implanted in Braden’s chest.

Those wires go inside his body and hook into the muscles that expand his chest.

The pacer stimulates those muscles, making them expand, which pulls air into Braden’s lungs.

The advantages are numerous: It doesn’t plug in, so power failures are not a worry. It weighs less than a pound.

The problem, Nancy Howe said, is that the pacer is not approved by the federal Food and Drug Administration yet, which is why she’d like more people to know about it.

At present, it can only be installed by one doctor in the country, Dr. Raymond Onders, at the University Hospital in Cleveland, which is where Braden went last year.

It took about four years to get the surgery done, primarily because the Howe’s insurance initially balked at the experimental status of the procedure.

There are clear financial advantages, though. It costs $1,000 a month for the ventilator. A procedure using something similar to the pacer costs $100,000, but this device costs $30,000.

“I finally sat down and explained all of it to them,” Nancy Howe said. “At first, they weren’t too excited, until I got my arm around him and said, ‘How many of you would deny him the ability to breathe on his own?’ and then they just went, ‘Oh.’ ”

Pulling up Braden’s shirt, she showed how it works. A bandage covers the site where four wires are implanted in his chest with a small plug attachment.

She took the pacer out of a bag, plugged it in, turned it on, then unhooked the ventilator hose from Braden’s throat.

His chest started heaving up on its own.

“It’s not hard for him, but it’s an adjustment,” she said, “because the ventilator breathes just a little bit differently.”

“I can’t talk as much as I usually can,” Braden said.

But he was breathing, on his own.

What’s next for Braden?

His pacer was installed in Cleveland, but the doctor “makes house calls,” Nancy Howe said. On Tuesday, a nurse from Onders’ office will fly to Utah to check up on Braden. Nancy Howe said he hasn’t even had a cold and has been doing fine, so she expects the checkup to be routine.

Braden is majoring in telecommunications at Weber State University and hopes to graduate in another year.

He’d like to find a job designing Internet Web pages.

He has even appeared in a movie made by the Division of Services for People With Disabilities. The film will be shown to employers to display the abilities of the handicapped.

Nancy Howe said Braden is at the end of the film, discussing his own work and saying, “Please hire me one day.”