Help End Paralysis and Win a Trip to ‘The Office’ 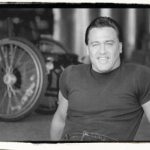 Help “Office” star Marcus York raise money to find a cure for spinal cord injuries, and you could win a visit to the world’s most famous fictional paper company.

When a car accident left Marcus York paralyzed and confined to a wheelchair at age 22, he didn’t let it stop him from pursuing careers in television, film and modeling. Now, he’s become a well-known figure to the American public as a recurring character on NBC’s The Office.

York plays Billy Merchant, the owner of the business park in which the erstwhile Dunder Mifflin (now a division of Sabre) Scranton, Penn. branch is located. He loves playing the no-nonsense character who controls the office park from a seat of power; however, he has made it his mission to help people with spinal cord injuries to get out of wheelchairs permanently.

Marcus York serves as the Southern California representative for SCICure Research Advancement, a lab dedicated to ending paralysis through human trials with non-embryonic stem cells. According to People.com, the actor wrote to President Obama about the foundation’s work and was invited to Washington D.C. to meet with his special assistant for disability policy, Kareem Dale.

The facts are simple, York told People that “the US spends $15 to $20 billion annually on care and supplies for spinal cord injury victims, [but] less than $100 million is devoted to research.” By supporting efforts for a cure, we can help reduce the massive amount of money spent on care. SCICure’s goal is simple, York told PopEater, “Accelerate research and get us out of wheelchairs as quickly as possible!”

Now, York is using his entertainment industry connections to help SCICure raise $3 million to start a clinical trial program directed by Steven Levesque, a neuroscientist at Cedars-Sinai Medical Center and UCLA. By donating just one dollar ($1!), you’ll be entered to win a trip to the Hollywood set of The Office. The winner will receive two round-trip tickets to Los Angeles, a two-night stay at a hotel, transportation to and from the studio, a meet-and-greet with cast members, set visit and the chance to watch the show being filmed.

“The winner can expect to meet a cast and crew that are probably some of the friendliest people in Hollywood,” York tells PopEater. “And it would certainly assist in bringing in the funding to help the millions of paralyzed individuals worldwide.”

Use your voice to access the world with a new Android...