Jeffrey Guest Football Star spinal cord injury wants to walk again. Jeffrey Guest needs helpMay 1, 2010
During his athletics career at Danville High School, Jeffrey Guest was known for his quickness and elusive moves. If he wanted to get somewhere, he usually could. But not today.

Guest remains paralyzed due to an Aug. 7, 2009 automobile accident. He has gone from a gifted athlete to not being able to walk — a mind-boggling turn of events for anyone, but even more devastating for a young athlete who probably considered himself invincible.

Hopes to get stronger

“I am trying to get used to being paralyzed. Things are so different now,” said Guest. “I still have some paralysis. I am hoping I can eventually get stronger and can move around then. I can feel below my belly button now, something I couldn’t do before.

“I am a lot better than what I was, but things could still be a lot better. I have had to learn to have a lot of patience, something I never had before. It’s just so hard to adjust to this after being used to doing whatever you wanted when it came to moving or running around.”

Now he needs help, too.
If he can continue his rehabilitation, he has a chance to perhaps be able to walk again. He could certainly learn to drive a vehicle with special equipment.

But he needs financial help. He has set up an account — Team Jeffrey — at Farmers National Bank, and he’s making a reluctant plea for help.

It’s not something he wanted to do, but financially he has no other hope.

“I am trying to get some fundraising and donations going,” Guest said. “I just don’t know exactly what to do so people can catch on and maybe help me out. I know people around here are very kind and generous. I know, or at least hope, there are people who will want to help if I can just let them know how.”

Guest, a 2007 Danville graduate, says he’s not about to give up hope that he will get better — and walk again.

Credit his competitive nature for that strong will at a time when it would be easy to give up — or at least think about it.

“If I can just get my rehab, I have a way better chance to get better,” Guest said. “I have to keep believing that. It’s a lot better than sitting and hoping and praying. I know I can retrain my mind to work my legs and muscles. I have a better chance of walking again and being able to be active if I can get the help I need.

“At times, it has been hard to stay optimistic. My whole life just changed in an instant. No one thinks that is going to happen, but it did. However, now I want to get better.

“The accident made me accept the reality that I have to change a lot. I try to stay positive and pray at night to keep my faith. If not, I am afraid I would just break down and give up — and that won’t help anybody. I know I will walk again one day. I know that. I just need some help to make it happen.” 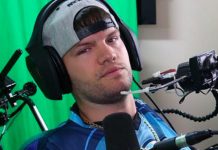 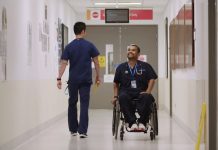 Emergency Department Dr with a wheelchair

The Buoniconti Fund to Cure Paralysis – A New Day Has...